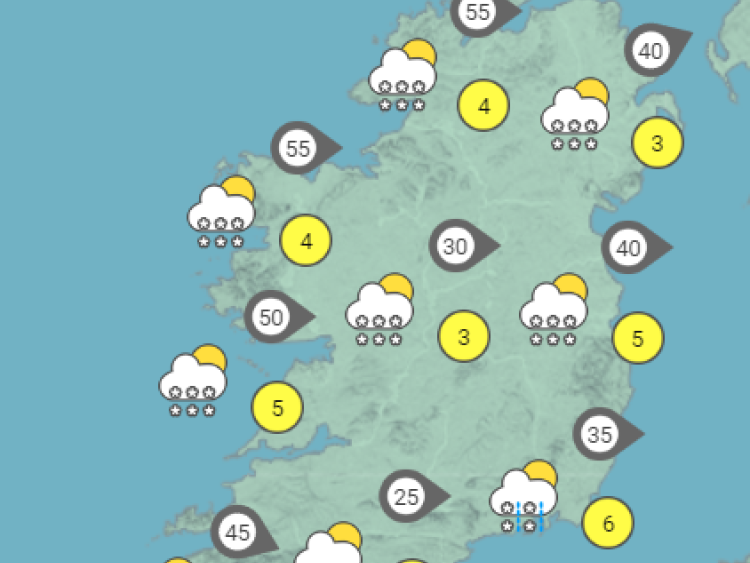 A national Met Éireann weather warning remains in place for the rest of Tuesday and the weather is set to stay very unsettled for the rest of the week if a little less cold.

The Status Yellow snow and ice alert for Ireland warns of widespread wintry showers through Tuesday with some snowfall accumulations, especially in the west and north. Some disruption to travel is possible, particularly over higher routes.

The warning is valid until just before midnight on Tuesday, November 11.

In its weather forecast for Tuesday, Met Éireann says it will remain cold and icy this morning with lying snow in places, particularly across the western half of the country.

The forecaster says it will be very windy again with a mix of sunny spells and further hail, sleet and snow showers with isolated thunderstorms. Highest temperatures only reach between of 3 to 5 degrees but it will feel colder in strong and gusty westerly winds.

A combination of Spring Tides, strong onshore winds and high seas will result in a risk of coastal flooding along the Atlantic seaboard, especially around high tide.

Wintry showers will continue for a time on Tuesday night but will tend to become confined to western and northern counties later in the night and turn increasingly to rain and hail. Met Éireann says frost and ice will form in many areas as the strong west to southwest breeze begins to moderate. Lowest temperatures of minus 1 to plus 2 degrees.More below tweets

A nationwide forecast and outlook covering the next week can be found here. https://t.co/9gKN6SVok4 pic.twitter.com/f0cq6h1hwp

Cold & icy this morning with snow lying in some areas, particularly across the western half of the country. Very windy with a mix of sunny spells & hail, sleet & snow showers with isolated thunderstorms. Highs of 3 to 7 degrees but feeling colder in strong & gusty westerly winds. pic.twitter.com/1ZyvP1ZeB0

Forecast issued at 9.11am on February 11 beyond Tuesday.

Wednesday: Sunny spells and scattered showers for a time on Wednesday, the showers mainly affecting the west and north of the country. Later in the day cloud will thicken from the south and rain will spread into west Munster by evening. Highest temperatures of 4 to 8 degrees in moderate to fresh southwest breezes.

On Wednesday night, rain will extend northwards to all counties accompanied by strengthening southeasterly winds with some spot flooding. The rain will turn to snow across parts of Connacht and Ulster with accumulations for a time before the snow transitions to rain by Thursday morning. Minimum temperatures of 1 to 4 degrees.

Thursday: Showery outbreaks of rain across the country on Thursday with blustery west to northwest winds. Turning drier later in the day as temporary ridge of high pressure builds in from the Atlantic. Highest temperatures ranging from a rather chilly 4 or 5 degrees in Ulster to 9 or 10 degrees along the south coast. Dry for much of Thursday night with a risk of frost and lowest temperatures of 0 to 4 degrees, coldest in the north and east.

Friday: Southerly winds will strengthen on Friday and a band of rain will move quickly in across the western half of the country during the morning, extending eastwards to remaining counties in the afternoon. A clearance to bright spells and showers will follow from the west. Top temperatures of 9 to 12 degrees. Clear spells on Friday night but rain is expected to arrive along the Atlantic seaboard during the night and southerly winds will freshen. Lowest temperatures of 5 to 8 degrees.

Saturday: Early indications suggest Saturday will be a wet and windy day with heavy rain clearing to showers during the afternoon and evening. Top temperatures of 8 to 12 degrees in strong and gusty southwest winds. Turning colder overnight with scattered rain or hail showers and lows of 2 to 5 degrees.

Sunday: The latest guidance indicates that Sunday will be another wet and blustery day with showers or longer spells of rain.