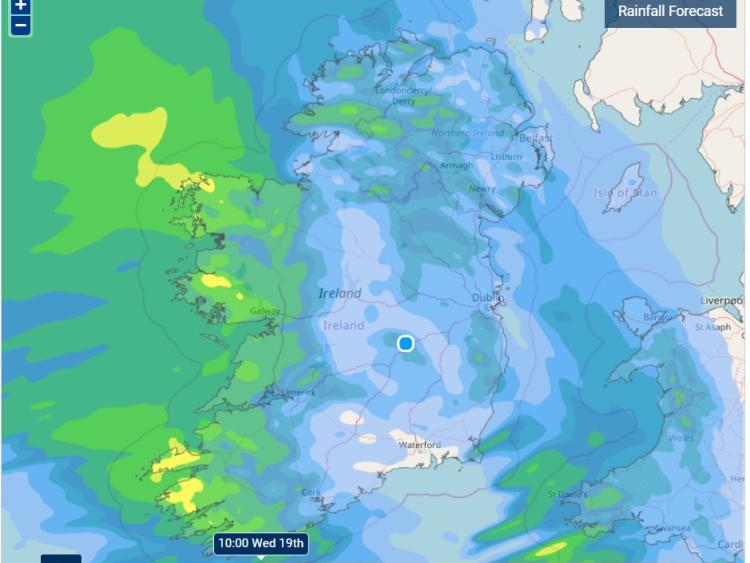 Met Éireann has put parts of the country on alert for 24 hours of rain in a new weather warning which forecasts heavy rain and flooding.

The forecaster has issued a Status Yellow rainfall warning for Connacht, Longford, Donegal, Clare and Kerry.

It says heavy rain is expected through Wednesday into Wednesday night, with 25 to 40mm expected. The forecaster says localised flooding is likely as ground is saturated at the moment and river levels are elevated following recent heavy rainfall.

The warning is valid from 4am on Wednesday to 4am on Thursday.

In its national outlook, Met Éireann says changeable and unsettled weather will continue for the rest of the week and over the coming weekend. MORE WEATHER DETAILS BELOW TWEET.

Our 7 day Atlantic chart showing the precipitation and pressure forecast in 6 hour intervals:https://t.co/v5aQGT8F9e

The nationwide forecast and outlook covering the next week can be found here: https://t.co/yEsIuCkWlq pic.twitter.com/wXpq7B82fQ

NATIONAL FORECAST
Issued by Met Éireann on February 18 at 11:52am.

TUESDAY 18TH FEBRUARY
Cold and blustery today, with sunny spells and scattered showers of rain or hail, with a risk of thunder. Showers will be heavy and prolonged in places early this afternoon, merging to give longer spells of rain. Showers will turn increasingly wintry in the north and west later this afternoon, with some snow possible over high ground. Maximum temperatures 5 to 8°C, in fresh to strong and gusty westerly winds, up to gale force on Atlantic coasts.

Early tonight, showers will largely die out and most areas will be dry for a time, with clear spells and winds easing. Cloud will increase from the Atlantic and outbreaks of rain will extend eastwards across the country, reaching all but the northeast by morning. Cold at first, with minimum temperatures of 0 to 4°C, coldest in the east and north, with frost and a risk of icy patches, but temperatures will rise later. Winds moderate westerly, later backing southerly in Atlantic coastal counties and freshening.

WEDNESDAY 19TH FEBRUARY
Wednesday will be very windy, with widespread rain, heavy at times in west Munster, Connacht and west Ulster, with a risk of flooding. Some drier spells will develop later in the east and south. Mild, with maximum temperatures of 9 or 10°C, in fresh to strong and gusty south to southwest winds, reaching gale force on Atlantic coasts.

Rain will be widespread for a time, heavy in places, with fresh to strong south to southwest winds on Wednesday night. Clearer conditions, with scattered showers, will follow from the northwest later Wednesday night and during Thursday morning. With the clearance, winds will veer westerly and ease for a time. Mild at first, but turning cold later, with lows of 1 to 4 degrees.

Thursday: A cold, windy day, with sunny spells developing, but scattered showers also. Some of the showers will be of hail, with a risk of thunder, especially in Ulster, Connacht and west Munster. Some wintry showers of sleet or snow are possible also, mainly over high ground. Maximum temperatures 5 to 8 degrees, in fresh to strong and gusty westerly winds, up to gale force on western and northern coasts.
Clear spells and a few scattered showers early on Thursday night, but persistent rain will extend from the Atlantic later, affecting mainly west Ulster and Connacht. Minimum temperatures of 2 to 5 Celsius, in fresh to strong southwesterly winds, up to gale force on Atlantic coasts.

Friday: Wet and very windy, with occasional rain, heavy in places, with a risk of flooding, especially in Connacht and west Ulster. Maximum temperatures 9 to 12 degrees, in strong and gusty southwest winds. Further rain on Friday night, clearing from the northwest to scattered showers and turning cold. Min. 2 to 5 C.

Weekend: Present indications suggest the weekend will remain unsettled. Saturday will be cold and windy, with bright spells and scattered showers, some possibly wintry in the north and northwest, mainly over high ground. Max. 5 to 9 Celsius, mildest in the south and southeast, with fresh to strong westerly winds. More persistent rain will extend from the Atlantic at times during Saturday night and Sunday.