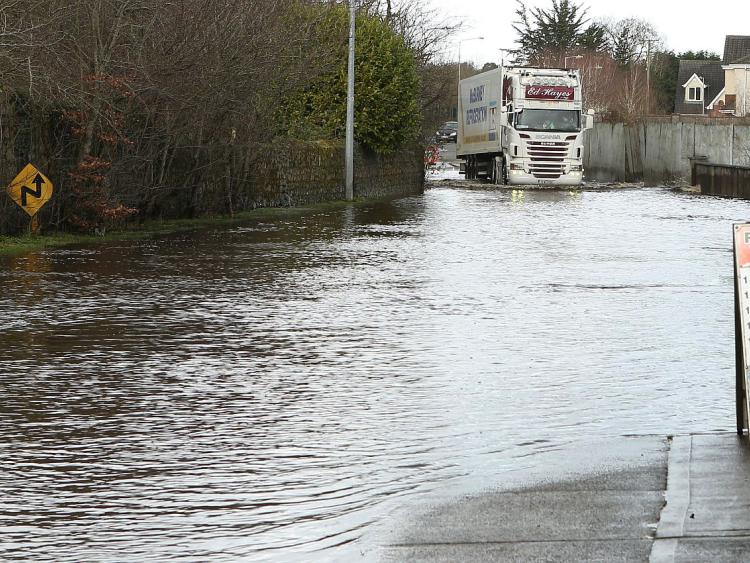 A truck drives through the flood at Botley Lane in Portarlington on the Laois Offaly border. Photo: Michael Scully.

Met Éireann has warned of more heavy rain with the prospect of more flooding after a week which brought rain which was 500% above normal in parts of the country.

In its farming weather forecast going into the weekend, Met Éireann says a relatively dry Thursday for most will be followed by a wet and dull Friday. It says the weekend and early days of next week are forecasted to be unsettled with little in the way of dry weather.

"As a result, forecast precipitation amounts will be above average throughout the country. Most of the country will see between 2 and 2½ times the normal weekly rainfall.

"Parts of Ulster, north Leinster and Dublin have a forecast for between 160 and 170% of the normal rainfall for the time of year. As river levels remain elevated and soils waterlogged any further heavy rainfalls this week will add to the risk of flooding," says the forecaster.

"As river levels remain elevated and soils waterlogged any further heavy rainfalls this week will add to the risk of flooding," says the forecast.

Many parts of the country are in flood, especially on land near rivers and because the ground is waterlogged due to weeks of stormy weather. Met Éireann expects this situation could deteriorate.

"Most soils remain saturated or waterlogged and this is likely to worsen in the unsettled week ahead," he said.

In its analysis, Met Éireann said it has been "extremely wet" over the past week last seven days, with very wet days last Friday, Saturday and Sunday.

"Rainfall accumulations this week of between two and five times the normal weekly rainfalls for the time of year," it said.

Knock Airport station was the wettest station by rainfall totals this week, recording 98.6 mm of rain, which is 390% of its average for the time of year. Gurteen station in Co. Tipperary, which generally has less rainfall than Knock, recorded rainfall of 82 mm equates to 506% of its average amount over the past seven days.

While February has been very wet with two storms, Met Éireann says it has not reached 2015 records.

"The provisional rainfall totals for 1-24 February are currently at 225% of Ireland's average. For comparison, December 2015 (Storms Desmond on Saturday 5th,  Eva on Thursday 24th and Frank Tuesday 29th), was around 245% of normal," said a new commentary on the Met Éireann website.

"A series of vigorous Atlantic depressions affected the country in February, tracking closer to Ireland than usual and bringing prolonged periods of heavy rainfall and stormy weather leading to extensive flooding in places. The Polar jet stream extended across the Atlantic right over Ireland for most of the month, marking the tracks of successive storms resulting in 1.5 to 2.5 times the normal rainfall so far this month throughout the country." said the commentary.