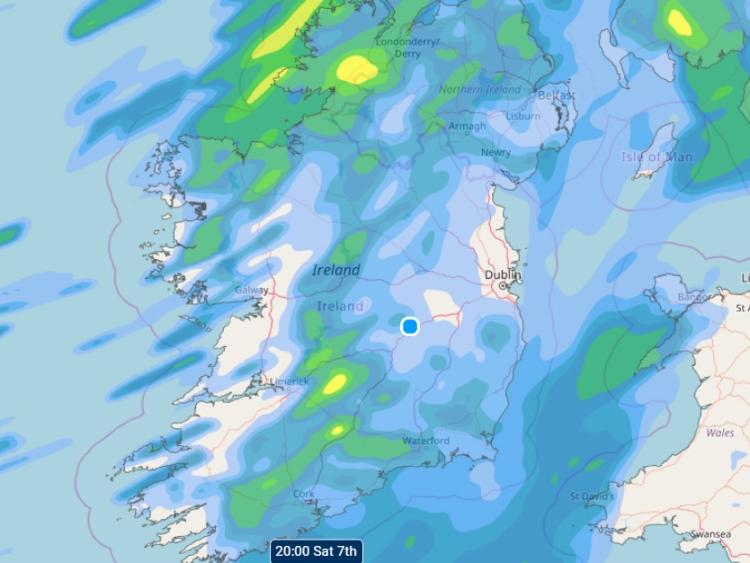 More unsettled weather on the cards.

Met Éireann has issued a four-day weather advisory and weather warning ahead of another stormy weekend of weather which will feature strong winds and heavy rain that carries a flood risk.

The forecaster says strong winds at times also, with gales on coasts. The advisor is valid from noon on Saturday, March 7 to 6pm on Tuesday, March 10.

Our 7 day Atlantic Chart shows the precipitation and pressure forecast in 6 hour intervalshttps://t.co/9Giuj4UrWU

A nationwide forecast and outlook covering the next week can be found here. https://t.co/9gKN6SDMVu pic.twitter.com/cfHfcOe83l

NATIONAL FORECAST issued on Friday, March 6 at 11:50am

FRIDAY 6TH MARCH
Scattered outbreaks of rain clearing from Ulster and north Leinster by early afternoon, with sunny spells and isolated showers extending from the west to all areas. Winds mainly moderate northwest. Afternoon highs of 6 to 9 degrees.

Dry and clear in the east at first tonight, but thickening cloud in the west will extend countrywide overnight, with patchy outbreaks of rain and drizzle spreading eastwards across the country. Minimum temperatures of 0 to 4 degrees, coldest in the east with a light frost possible there early in the night, but becoming milder overnight as southerly winds freshen.

SATURDAY 7TH MARCH
Saturday will be a mild, windy and mostly cloudy day. Eastern areas will see a good deal of dry weather through to early afternoon, with some limited bright spells, and just the odd patch of light rain or drizzle. Further west, patchy rain and drizzle will turn to persistent, and occasionally heavy, rain in the afternoon. The rain in western areas will spread to all areas in the late afternoon and evening. Highs of 10 to 12 degrees in moderate to fresh and gusty south to southwest winds, strong to near gale on coasts.

Rain will be widespread for a time early on Saturday night, but a transition to clear spells and showers will soon extend from the west. It will continue breezy in moderate to fresh and gusty southwesterly winds. Lowest temperatures of 3 to 6 degrees.

Sunday: Sunny spells and scattered blustery showers for Sunday. Some of the showers will be heavy with hail, and a risk of isolated thunderstorms. Top temperatures 7 to 10 degrees in moderate to fresh and gusty west to southwest winds, strong on Atlantic coasts.

Showers will become increasingly confined to the west and north for a time on Sunday night as west to southwest winds moderate, but cloud will increase and rain will push in from the Atlantic overnight. The rain will turn heavy at times in Atlantic coastal counties. Winds will back southerly and strengthen too, with gales developing on west and southwest coasts by morning. Lows of 1 to 4 degrees, coldest in Ulster.

Monday: Wet and windy on Monday. Rain will become widespread in the morning, falling as sleet and hill snow for a time in parts of Ulster. The rain will be heavy, especially in Atlantic coastal counties, with some spot flooding, but a transition to showers will extend from the west in the afternoon. Winds will be fresh to strong and gusty west to southwest, with coastal gales. Mild with afternoon highs of 9 to 13 degrees, but it will be cold in Ulster at first.

Blustery westerly winds easing on Monday evening but winds increasing again overnight in fresh to strong and gusty southwesterly winds as further outbreaks of rain push in off the Atlantic, with coastal gales again by morning. Lows of 5 to 9 degrees.

Tuesday: Tuesday will again be windy. Current indications suggest it will be another relatively mild day with fairly widespread outbreaks of rain for time, transitioning to brighter intervals and showers in the afternoon. Coastal gales are likely.