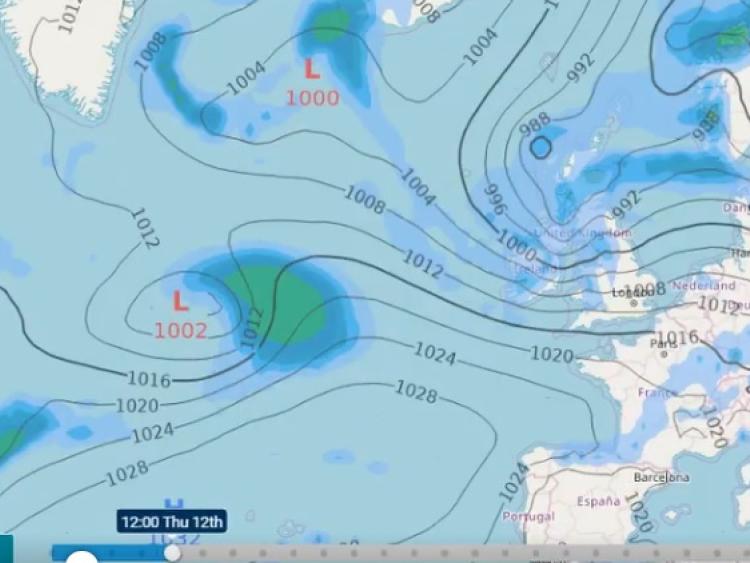 Met Éireann has a number of weather warnings in place as stormy wintry weather which includes snow and ice in the forecast.

With Status Orange and Yellow weather warnings issued, Met Éireann says cold, blustery and very showery weather with a risk of hail and thunder is expected to turn increasingly wintry with some snow on higher ground on Wednesday and Thursday.

Scattered wintry showers will continue through the night but it will turn dry in many Eastern parts later. Icy stretches likely with some local accumulations of snow on high ground. The night is expected to be a cold and blustery night with strong to gale force winds developing towards morning. Lowest temperatures of -2 to + 2 degrees with frost in sheltered areas.

Thursday is set to be a very windy tomorrow with stormy conditions over parts of Donegal in the morning and the risk of coastal flooding. Met Éirann says showers in the west initially will become widespread during the day. Some wintry falls will be possible too, mainly of sleet, and there will be a risk of hail and thunder. Some sunny spells too. Highest temperatures of just 5 to 8 degrees. Winds moderating later in the day.

Thursday night will also feature scattered showers early on but they willl become isolated overnight, with dry and clear spells developing. Fresh to strong westerly winds will also ease as the night goes on. Cold with lowest temperatures of -1 to +3 degrees.

The outlook is for the weather to remain unsettled for the rest of the week.

It will be dry in most places on Friday morning, with some sunny intervals. Met Éireann says rain will move into the southwest on Friday morning though and will spread northeast throughout the day, with some heavy falls possible in southern areas. Highest temperatures of 7 to 9 degrees and south to southeast winds will be mainly moderate.

It looks like being dry in most areas on Saturday morning, but rain will move into western areas during the morning and spread eastwards throughout the day, with some heavy falls possible, particularly in the west. South to southwest winds will be light at first, but they are expected to strengthen throughout the day, becoming strong near coasts. Highest temperatures of 9 to 11 degrees.

Outbreaks of rain will be become mainly confined to the west and north during Saturday night with clear spells developing elsewhere. It will be cold with lowest temperatures of 2 to 4 degrees, and frost developing as winds ease.

Sunday looks to be a cold and showery day as light to moderate westerly breezes turn northerly. Highest temperatures of 6 to 9 degrees. Current indications are for a very cold, dry and frosty night on Sunday night.

Our Atlantic chart shows precipitation and pressure forecast in 6 hour intervals for the next 7 days.https://t.co/9Giuj4CR5m
The national forecast and the national outlook for the coming days are available here.https://t.co/9gKN6SVok4 pic.twitter.com/FCa5f7uGcl

Status: Orange Wind warning for Donegal
Southwest winds veering west to northwest will reach mean wind speeds of 60 to 75km/h with gusts of 100 to 120km/h.

Status Yellow - Snow/Ice warning for Donegal
Showers will turn increasingly wintry during Wednesday with a mix of hail, sleet and snow, leading to icy conditions on untreated surfaces. Some localised accumulations will occur.

Due to a combination of waves, spring tides and surge, the possibility of coastal flooding is increased along western and northwestern coasts on Thursday.

Status Orange - Gale Warning
West to Southwest winds will reach gale force at times this evening on coasts from Howth Head to Roches Point to Loop Head and on the South Irish Sea.