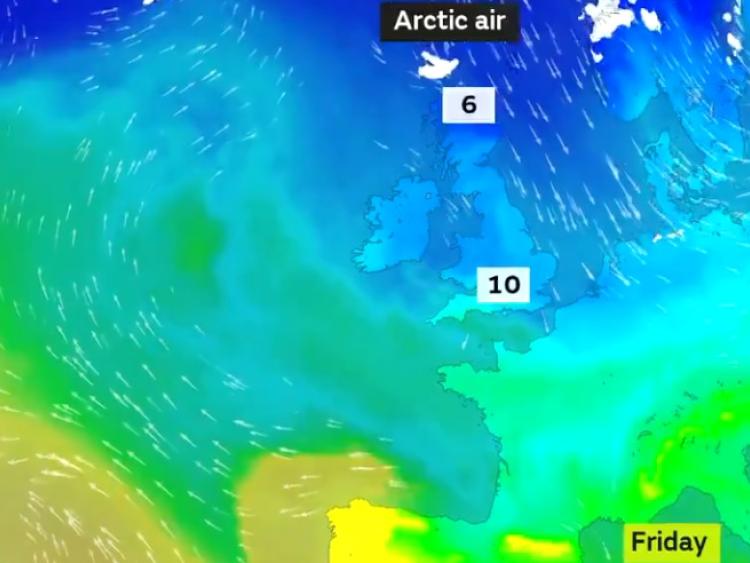 Cold weather in a forecast

Spring may be in the air but Ireland is set to get a short-lived cold weather snap later this week as the country continues its coronavirus Covid-19 lockdown.

Weather forecasters at Met Éireann's official forecasting partner agency in Britain, the Met Office, have predicted a blast of arctic air to sweep down over Britain and Ireland later this week.

After a bitter wind this past #weekend, it will be less cold for a time this week, ahead of a short lived cold snap for Thursday and into Friday pic.twitter.com/X0BE29Tx9g

Met Éireann NATIONAL FORECAST issued at 11.20 am on March 30.

TODAY - MONDAY 30TH MARCH
Dry in most areas for the rest of today, with some bright or sunny spells. Mostly cloudy, however, with a few isolated light showers, mainly in the north and northwest and along the east coast. Cold, with maximum temperatures of 8 to 11 Celsius, in light to moderate northerly breezes.

TONIGHT
Tonight will be mainly dry, with clear spells, but a few light showers are possible along north and east facing coasts. A few mist or fog patches also. Cold, with minimum temperatures of 1 to 4 Celsius generally, but falling to 0 or minus 1 degree Celsius where any breaks in cloud occur, with some frost

TOMORROW - TUESDAY 31ST MARCH
Tomorrow, Tuesday, will see little change. It will remain mostly dry, with some bright or sunny spells, but cloudy periods also. A few scattered light showers will occur also, mainly in the northwest, north and east. Maximum temperatures 8 to 11 Celsius, in light to moderate north to northeast breezes.

NATIONAL OUTLOOK
Tuesday night will be cold and mainly dry. There'll be some clear spells, but a fair amount of cloud also with some patches of mist and drizzle. Lowest temperatures of 1 to 4 degrees.

Wednesday will be mainly dry and mostly cloudy. The best of any sunny breaks will be in the east and south. It will be cloudier in the west and north, with perhaps the odd light shower. Highest temperatures of 7 to 10 degrees with moderate northwest breezes. Wednesday night will be mainly dry. However, rain will develop in the northwest overnight. Lowest temperatures of 1 to 4 degrees.

Thursday will start off dry in the east and south. However, outbreaks of rain and drizzle in the west and north will gradually spread southeastwards through the day. Amounts will be small. Highest temperatures of 9 to 11 degrees with moderate to fresh west to northwest winds.

On Friday, after a mainly dry start, outbreaks of rain and drizzle will spread from the west. Amounts will be small. It will be a milder day with highest temperatures of 9 to 12 degrees and moderate southwest breezes.

Saturday will be mostly cloudy with rain spreading southeastwards over the country, possibly heavy for a time in the northwest, but lighter elsewhere. Highest temperatures of 8 to 11 degrees.

At the moment, Sunday looks like being mainly dry, while the early days of next week will be mixed with rain at times.