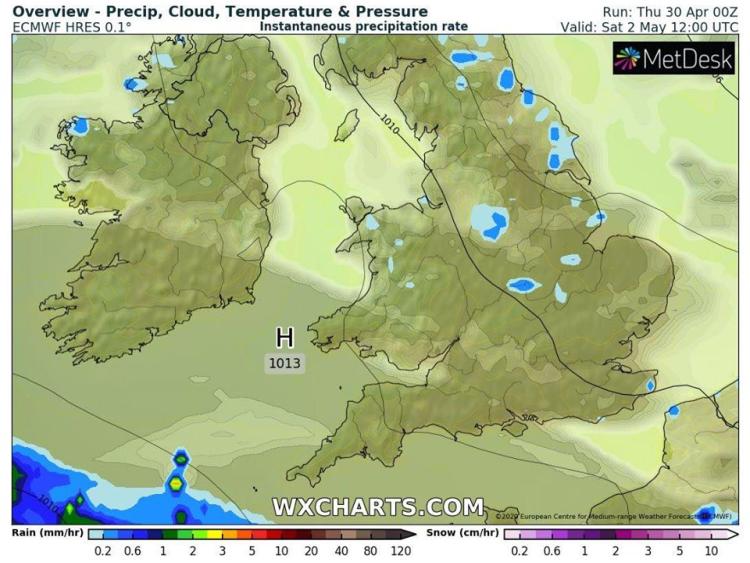 According to www.carlowweather.com, the latest charts show a mainly dry and settled spell of weather with sunny spells and milder for Bank Holiday.

Alan added: "The weekend will be milder with sunny spells and mainly only southern counties that are at risk of rain."

Met Eireann is forecasting a mostly dry day tomorrow [Saturday] apart from isolated showers. Sunny spells to begin and end the day, but becoming cloudier during the afternoon. Feeling a little milder than recent days with highest temperatures ranging 11 to 13 degrees.

Whilst most areas will remain dry over the May Bank Holiday weekend, some rainfall may move up across south and southwest counties. Mild in sunshine, especially across the midlands and west.

SUNDAY : Current indications suggest most areas should remain dry with sunny spells and just light variable breezes. Munster may however see some showery falls of rain. Highest temperatures will range 12 to 17 degrees Celsius, mildest across the midlands and west. Chilly after dark with lowest temperatures ranging 2 to 6 degrees Celsius.

MONDAY: Most areas staying dry with hazy sunshine and light easterly breezes. Highest temperatures 12 to 17/18 degrees Celsius, mildest across the west and southwest owing to an easterly flow. After-dark lowest temperatures will range 4 to 8 degrees, in moderate southeast breezes. Frontal cloud and rain may move into the far southwest later in the night.

TUESDAY: Some further rainfall is likely across the southwest of Munster where it will be cool; most other areas should stay dry with sunny spells and moderate easterly breezes. Highest temperatures will range 10 to 16 degrees, mildest across Connacht.