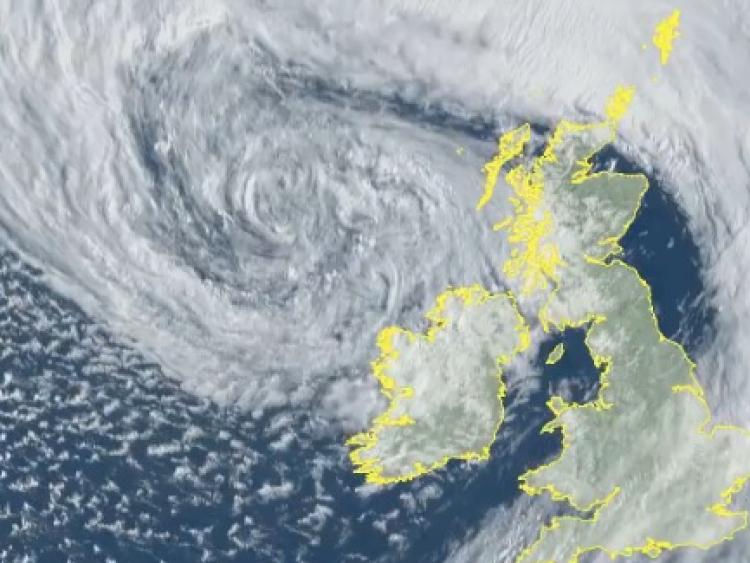 Status Yellow wind warning is in place for all of Ireland after a weather front nears storm force strength near Ireland.

Met Éireann has, as a result, urged the public to measures to ensure the wind does not cause damage to their properties as it impacts on Friday and Saturday.

After initially being issued for just two counties on Thursday, moring Met Éireann's updated and extended warning to cover Munster, Leinster, Connacht and Ulster at 11am on Friday.

"Strong southwesterly winds will give damaging gusts of 80 to 100 km/hr," said the forecaster.

The three Yellow level warnings are valid from 11am until 9pm on Friday.

Status Orange gale warning is in place for sea areas with south to southwest gales or strong gales today on all Irish coastal waters and on the Irish Sea and occasionally touching storm force 10 locally between slyne Head and Bloody Foreland.

A weather advisor is in place for "unseasonably" windy weather to affect the country.

"Given the time of year, there is potential for wind-related impacts such as debris from trees and movement of unsecured outdoor items," said Met Éireann.

The advisory is valid unit 6pm, Saturday, May 23.

The weather front has not been given storm status. FORECAST BELOW TWEET.

A nationwide forecast and outlook covering the next week can be found here. https://t.co/9gKN6SVok4 pic.twitter.com/j9ZxDyyWh8

TODAY - FRIDAY 22ND MAY
Continuing very windy countrywide for the rest of today with strong, very blustery southwest winds giving some damaging gusts. Widespread heavy showers or longer spells of rain also with sunny spells at times too. Cool with highest temperatures of 12 to 16 degrees.

TONIGHT
Tonight will be windy and showery with fresh to strong, gusty southwest winds and gales near northwest coasts. There'll be further heavy showers of rain or hail, some of them thundery. Lowest temperatures of 7 to 9 degrees.

TOMORROW - SATURDAY 23RD MAY
Saturday will be a blustery or windy day. It will be mostly cloudy over the northern half of the country with spells of showery rain. Brighter further south with sunshine and showers. Highest temperatures of 12 to 16 degrees with fresh, gusty westerly winds, which will be strong to gale force in the northwest.

NATIONAL OUTLOOK
On Saturday night, outbreaks of rain will continue in Ulster and north Connacht and will eventually clear by morning. The rest of the country will be mainly dry with a fair amount of cloud and some clear spells. Lowest temperatures of 7 to 9 degrees with fresh, gusty westerly winds, gradually moderating.

Sunday will be mainly dry apart from perhaps one or two showers in the north and northwest. The best of the sunshine will be over the southern half of the country. there'll be a bit more cloud further north. Highest temperatures ranging from 15 degrees in the west to 20 degrees in the east with moderate southwest breezes.

Monday morning will be dry in most areas with sunny spells. However, rain and drizzle will develop in the west by noon and then move slowly eastwards across the country and lingering over Leinster and Munster on Monday night. Rainfall amounts will be small. Highest temperatures of 14 degrees in the west to 20 degrees in the east with moderate southerly breezes.

On Tuesday, there'll be a fair amount of cloud with some patchy light rain or drizzle or light showers in places. But some decent, bright or sunny intervals too. Highest temperatures of 16 to 20 degrees with light, variable breezes.

Wednesday will be warm and humid with rain over west Munster, Connacht and Ulster. It will be drier to the east and southeast with some bright spells. Highest temperatures of 14 to 18 degrees over the western half of the country and reaching 19 to 22 degrees further east.

On Thursday and Friday next, there'll be further spells of rain at times in the west and north, but it will be mainly dry in the east and south.