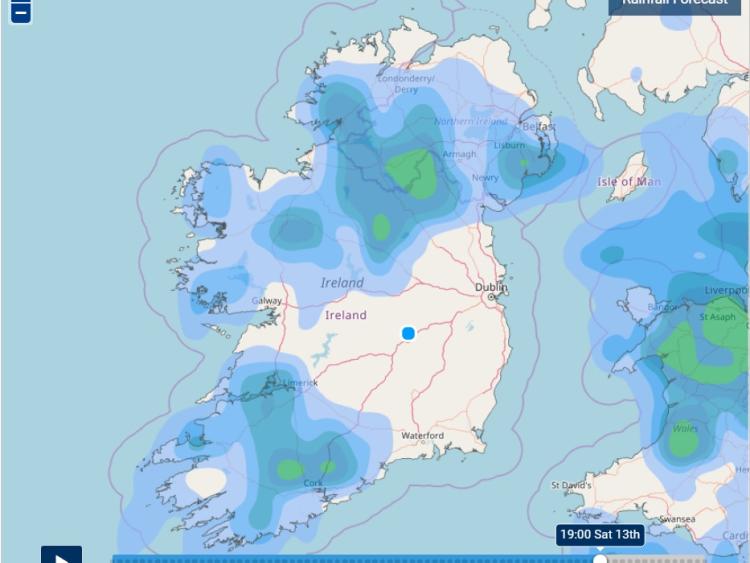 Weather forecast for Ireland for the rest of the week

More heavy bursts of above-average rainfall and windy weather is on the horizon according to Met Éireann in its weather forecast for the weekend and next week.

With some amateur weather pundits had talked up a heatwave, Ireland's official forecaster expects the humid thundery but warmer weather which has dominated in recent days to be pushed out of the way. Instead, Met Éireann is putting on notice for a fresher Atlantic weather front that will dominate for the weekend and into next week.

It says the national outlook, in summary, is for a "fresher and breezier weekend" of weather that will be "changeable with rain at times".

A weekend Status Yellow gale warning is already in place for some Atlantic coast counties. A Status Yellow rain warning has been issued for some coastal counties in Munster on Saturday.

As for the week ahead, there'll be no need for the power hoses or the sun loungers.

"Rainfall amounts in the coming week are expected to be above average in all areas, lowest in the eastern half of the country with between 120 to 200% of the average but reaching around 3.5 times the average in some western and southwestern areas," said the Met Éireann farm forecast issued on Friday.

"For the week ahead, it will be a bit cooler so temperatures will be closer to normal or even below in some western and central areas," it said.

As for sunshine here is what Met Éireann predicts the following.

"With unsettled conditions continuing for the next few days, sunshine amounts are likely to be below average in most places," it said.

TOMORROW - SATURDAY 20TH JUNE
Saturday morning will be mostly dry with some sunny spells, but with cloud increasing from the Atlantic. Rain will develop in the west towards noon and will spread eastwards through the afternoon and evening with some heavy bursts, especially in the south. Highest temperatures of 15 to 18 degrees with strengthening south to southeast winds, which will be strong along the west coast.

Saturday night: Remaining outbreaks of rain in the north and east clearing overnight with clear spells developing. Scattered showers will, however, follow from the Atlantic to affect mainly parts of the west and north overnight. Minimum temperatures of 10 or 11 degrees in moderate to fresh southwest winds, strong near Atlantic coasts.

Sunday: Sunday will bring a mix of cloud, sunshine and passing showers. The showers will be most frequent in the north and west, where some could be heavy and possibly thundery. Maximum temperatures of 14 to 18 degrees, coolest in the west, in moderate to fresh southwesterly winds. Any showers will soon die out on Sunday night, but cloud will thicken overnight and rain will extend eastwards from the Atlantic by morning. Minimum temperatures of 9 to 11 degrees. Southerly winds will fall light for a time before backing southeast and increasing moderate to fresh and gusty by dawn.

Monday: Current indications suggest Monday will be mostly cloudy and probably quite windy at first with outbreaks of rain and drizzle affecting much of the country, with some heavy bursts in places. Moderate to fresh and gusty southeasterly winds will veer southwesterly and gradually ease through the day. Maximum temperatures of 15 to 19 degrees, coolest in the west.

Tuesday: Details are somewhat uncertain at this stage, but the unsettled theme with outbreaks of rain looks set to continue, with a slow-moving weather front likely to be affecting the country in a mainly southerly airflow. Conditions on Tuesday will largely depend on where this frontal zone ends up with cloud and rain along the front and drier and brighter intervals on either side. Maximum temperatures will range 14 to 18 degrees.

Further Outlook: Changeable Atlantic type regime with low pressure situated to the north and west and higher pressures to the south and east.

Our Atlantic chart shows precipitation and pressure forecast in 6 hour intervals for the next seven days:https://t.co/9Giuj4CR5m
The national forecast and the outlook for the coming days can be found here:https://t.co/9gKN6SVok4 pic.twitter.com/5l4nInvDjb