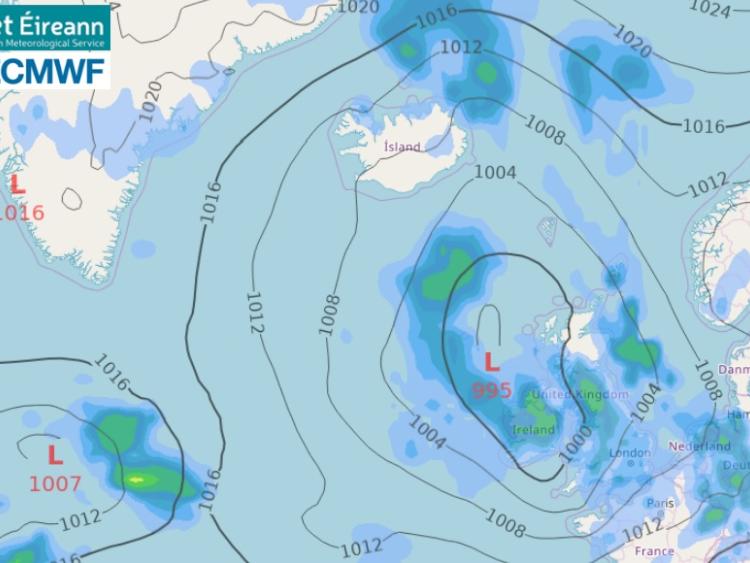 Met Éireann is forecasting a weekend of wet and windy weather which includes a rain warning and flash flooding as the Atlantic takes hold of our summer once again to deliver what looks a bad week of weather.

The forecaster expects wind, rain and cooler weather to be swept in from the west with flooding on the cards.

Status Yellow rain warnings have also been issued for parts of Ireland.

The wet and windy weather is set to last into next week. Met Éireann's farming forecast explains what is happening.

"A change to a cooler Atlantic airflow will bring showers and rain for much of the weekend and the beginning of next week," it says.

The forecast is bleak for sun lovers.

Our Atlantic chart shows precipitation and pressure forecast in 6 hour intervals for the next 7 days.https://t.co/9Giuj4CR5m
The national forecast and the outlook for the coming days available here.https://t.co/9gKN6SVok4 pic.twitter.com/8XOewvTaFI

SATURDAY 27TH JUNE
Frequent showers tomorrow, merging into longer spells of rain at times, with some heavy bursts, especially in parts of Connacht and western Ulster. Winds mostly moderate to fresh westerlies but increasing strong at times along coasts. Highest temperatures between 13 and 16 degrees.

NATIONAL OUTLOOK
Saturday Night: Further showers overnight. The showers will be most frequent in the north and west of the country, where they will merge into longer spells of rain towards morning. Lowest temperatures of 10 or 11 degrees with mostly moderate westerly breezes but winds strong and gusty along Atlantic coasts.

Sunday: Wet and dull for much of Connacht and Ulster on Sunday, elsewhere drier, brighter conditions with scattered showers. Highest temperatures 14 to 18 degrees generally, a little cooler under cloud in the north. Moderate to fresh and gusty westerly winds, strong along west and northwest coasts.

Sunday Night: Outbreaks of rain continuing in the north and west overnight. Mostly dry elsewhere with a moderate to fresh southwest wind, but winds will continue strong and gusty along west and northwest coasts.

Monday: A mix of sunny spells and scattered showers, the showers most frequent in the north and west. Highest temperatures of 14 to 16 degrees with a moderate to fresh westerly breeze that will be strong at times along the western coast.

Current indications suggest our weather will continue changeable with rain or showers at times, but dry interludes will occur too. Temperatures will be close to average or slightly below.

Status Yellow rainfall warnings have been issued for for Donegal, Leitrim, Mayo and Sligo this weekend.

Met Éireann's warning says there will be heavy rain and blustery conditions at times, from Saturday morning through to early Monday, leading to accumulations of 40 to 60mm with spot flooding. Higher totals are expected in mountainous areas with the risk of flash flooding.