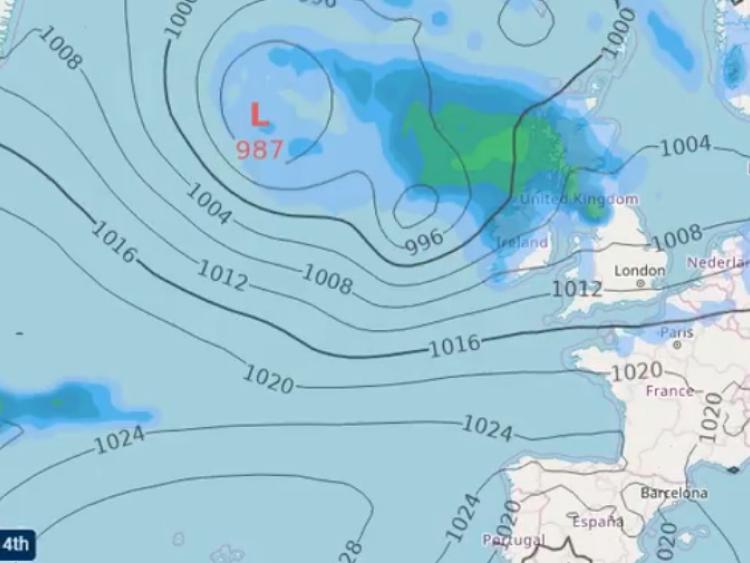 Gale force winds on the cards

Met Éireann has warned of another wet and windy summer weekend by issuing a weather advisory for all of Ireland.

The forecaster issued a weather advisory on Saturday ahead of gale force winds and plenty of rain sweeping across Ireland this weekend.

The Weather Advisory for Ireland says it will be unseasonably windy on Saturday night and Sunday, with strong and gusty westerly winds at times.

The advisory is valid from 9pm on Saturday to 8pm Sunday. MORE BELOW TWEETS.

Our Atlantic chart shows precipitation and pressure forecast in 6 hour intervals for the next 7 days.https://t.co/9Giuj4CR5m
The national forecast and the national outlook for the coming days available here.https://t.co/9gKN6SVok4 pic.twitter.com/2aOZAkiLZE

The national forecast issued at 11.52am on July 4 is as follows.

Saturday, July 4
Mostly cloudy today and misty in places, with scattered outbreaks of rain and drizzle. Hill and coastal fog also. Dry intervals will develop in many areas, with some bright spells, the best of these in the east and south. Mostly light to moderate southwesterly winds at first this afternoon will strengthen later on western and southern coasts. Maximum temperatures 15 to 20 degrees. This evening and early tonight, a spell of rain will extend from the Atlantic, persistent and widespread across Ulster, Connacht and west Munster, but more patchy in the east and south.

Tonight will be windy, with rain clearing from the west. Scattered showers will follow, most of them in Ulster, Connacht and west Munster. Windy, with fresh to strong and gusty southwesterly winds, veering westerly. Minimum temperatures 9 to 12 degrees.

SUNDAY, JULY 5
Tomorrow Sunday will be an unseasonably windy day with mix of sunny spells and blustery showers. The showers will be heaviest and most frequent in Connacht, Ulster and west Munster, with some thundery downpours possible. Cooler and fresher than recent days, in fresh to strong and gusty westerly winds. Maximum temperatures 13 to 17 degrees, coolest in Atlantic coastal areas.

Showers will become more or less confined to Ulster and north Connacht and along Atlantic coasts on Sunday night, with mainly dry and clear conditions developing elsewhere. Lows of 9 to 11 degrees. Gusty west to northwest winds will gradually moderate.

Monday: Showers will likely persist in Ulster and near some Atlantic Coasts on Monday, but it will be mainly dry elsewhere with sunny spells. Maximum temperatures will range from 13 or 14 degrees in the northwest to 17 or 18 degrees in the east and south in moderate northwest breezes. Most areas will be dry on Monday night with clear spells, just a few light showers near west and northwest coasts. Lows of 7 to 10 degrees in light westerly breezes.

Tuesday: Dry and bright to begin on Tuesday, however, it does look as though cloud will build in from the Atlantic during the morning with rain pushing into Atlantic coastal counties, before spreading elsewhere later in the day. Maximum temperatures 14 to 18 degrees in mainly light southerly breezes.

Wednesday: Current indications are for a damp start with rain and drizzle clearing slowly and eastwards, and gradually brightening up from the northwest. It may stay cloudy and drizzly for much of the day in southern counties, however. Highs of 14 to 18 degrees in light or moderate southwest breezes, becoming light northerly or variable later.

Further Outlook: There is significant uncertainty in the further outlook at this stage, but the overall pattern appears to maintain a changeable Atlantic regime.