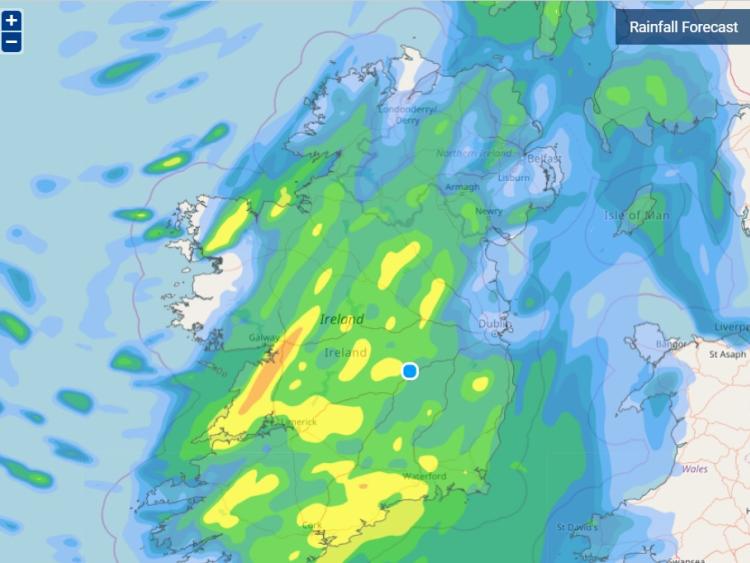 Met Éireann is forecasting wet and blustery over much of the country with heavy rain causing spot flooding in parts for the days ahead with stormy conditions on the card right through to the weekend.

The forecaster's weather charts show the worst of the weather will sweep in from the Atlantic on Tuesday and Wednesday while a stormy weather front from Europe looks like hitting Ireland over the weekend.

The forecaster says higher than average rain amounts are expected and it will be cool through the week with little sunshine.

The summary outlook is that the weather will turn cooler and more unsettled for the rest of the week and weekend. More weather details below tweets

Here are the Atlantic Charts for the coming week. These charts show forecast pressure and precipitation every 6 hours for the next 7 days. https://t.co/9Giuj4CR5m

Through the late afternoon and evening, persistent and locally heavy rain will spread eastwards over the western half of the country. Highs of 14 to 16 degrees with moderate to fresh southerly winds, increasing strong and gusty near Atlantic coasts this evening.

Early tonight, rain will continue to spread eastwards to all areas. It will be heavy at times with a risk of spot flooding. There'll be a clearance to showers in the west by dawn. Southerly winds will be fresh and gusty and will be strong in coastal areas. Lowest temperatures of 9 to 12 degrees.

WEDNESDAY
Wednesday will start off wet and blustery over much of the country with heavy rain for a time in the east and a continued risk of spot flooding. Brighter weather with scattered heavy showers will extend from the west to all areas through the late morning and afternoon. Highest temperatures of 13 to 15 degrees with fresh to strong and gusty southerly winds through the morning, becoming west to northwest and easing somewhat as rain clears.

Showers will continue into Wednesday night, most frequent in the west, where some will be heavy and possibly thundery with hail. Longer clearer intervals will occur over eastern parts of the country. Lowest temperatures of 2 to 6 degrees, coldest in the east where some grass frost is possible. Light west to southwest breezes will be moderate at the coasts.

Widespread showers for a time on Thursday, some of the showers heavy and possibly thundery with hail. Sunny spells will occur also. Light southerly breezes veering westerly. Cool, with highest temperatures of just 10 to 12 degrees.

The showers will become mainly confined to coastal and northern areas overnight with clear spells developing inland. Lows of 3 to 7 degrees with some grass frost possible. Winds will be light allowing some mist and fog patches to form.

Another cool day with a mix of bright spells and scattered showers, with the showers most frequent in the east of the country. Highest temperatures of 11 to 13 degrees, in moderate to fresh northerly winds.

Current indications suggest that it will remain cool and unsettled for the weekend with showers or longer spells of rain, turning heavy at times. There is also the potential for strong winds on Sunday, particularly in the west and northwest.