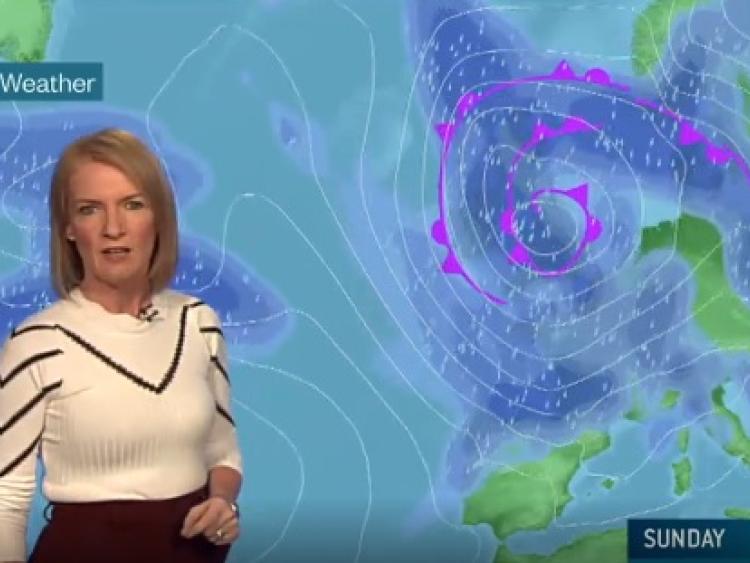 The forecaster has issued Status Yellow wind and rain warning for counties in the midlands and along west coast.

Both alerts warn of persistent or heavy rainfall will give totals of 25 to 40mm with higher amounts possible in mountainous areas. Met Éireann says this may result in some rivers flooding as well as surface flooding.

The second warning is valid from 6am Sunday to 6am Monday

The forecaster warns some rivers are at flood risk while surface flooding is also on the cards. The warning is valid from 6am to 11pm on Sunday, October 4. MORE BELOW TWEET

Status Yellow Rainfall warning for tomorrow Sunday has been updated.

Please see below or visit https://t.co/l8JdKfwZt9 for full details pic.twitter.com/A3tul6t9PF

Status Yellow wind warnings are also in force for Donegal, Mayo, Sligo, Galway, Clare and Kerry. The alerts say northwest winds, strengthening on Sunday, will feature average wind speeds of 50 to 65km/h and gusts of 90 to 100km/h.

The storm, which was named by French forecasters, originally swept in from the Atlantic over Spain and France but then moved up over Britain on Saturday. More below tweets.

Wet and windy today. Showers in the southwest at first. Persistent rain in Ulster and Leinster will spread southwestwards, continuing for the day, heavy at times with spot flooding in places. Highs of 11 to 14°C with fresh to strong, gusty northwest winds and gales on some coasts pic.twitter.com/9wHfvRncND

Our Atlantic chart shows precipitation and pressure forecast in 6 hour intervals for the next 7 days:https://t.co/9Giuj4CR5m

The national forecast and the national outlook for the coming days available here:https://t.co/9gKN6SVok4 pic.twitter.com/PwwBpJj354

NATIONAL FORECAST issued by Met Éireann at 11.53 am on Sunday, October 4.

SUNDAY: Wet and windy today. Showers in the southwest with persistent rain over much of the country, extending southwestwards and continuing for the rest of the day. It will be heavy at times with spot flooding in places. A few drier intervals will develop in the northeast later. Highest temperatures of 11 to 14 degrees with fresh to strong, gusty northwest winds and gales on some coasts.
Rain will continue in many areas overnight, but becoming lighter. There'll be some dry intervals in Ulster and Leinster as winds ease light to moderate northwesterly but remaining fresh in Munster and Connacht. Lowest temperatures of 7 to 11 degrees.

MONDAY: Cloudy on Monday morning with further rain or drizzle. The rain will clear slowly northeastwards through the day with bright spells and isolated showers following from the west, with more frequent showers later in the day. Highest temperatures of 12 to 15 degrees with moderate westerly breezes.

Tuesday will be cool and breezy, with sunny spells and showers, some heavy. Highest temperatures of 11 to 14 degrees with moderate to fresh west to northwest winds. Showers will continue in many areas on Tuesday night.

Wednesday will bring sunshine and showers, which will tend to die out in the afternoon and evening. Highest temperatures of 11 to 14 degrees with moderate westerly breezes. On Wednesday night, wet and windy weather will spread from the southwest with heavy falls of rain in many areas, especially in Munster and Leinster. East to northeast winds will be fresh to strong and gusty.

Thursday will start off wet and windy with further heavy rain in places. The rain will clear eastwards with sunshine and showers following from the west. Fresh, gusty northerly winds will gradually become westerly and ease. Highest temperatures of 9 to 12 degrees.

Friday will be cool and breezy with sunny spells and scattered showers, some heavy. Highest temperatures of 10 to 13 degrees with mostly moderate northwest winds.

Next weekend will continue cool with sunshine and showers.