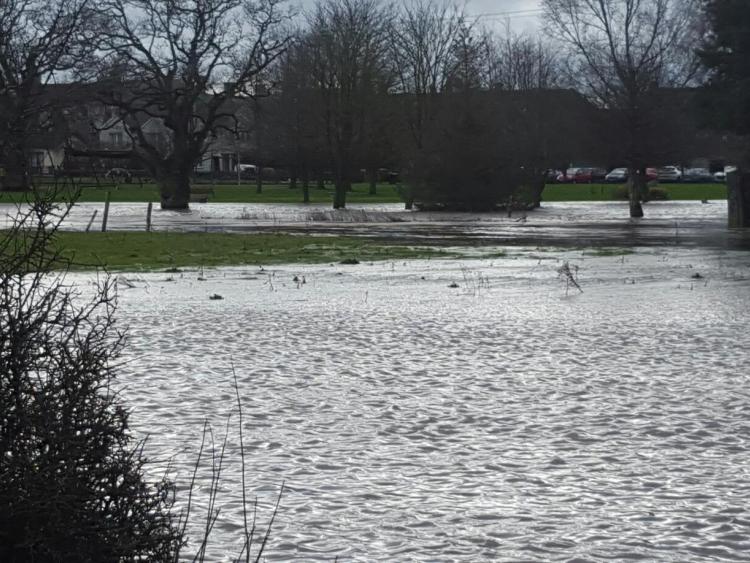 Flooding in Portarlington in early 2020

The Status Yellow warning says persistent and occasionally heavy bands of rain will cross the country beginning on Sunday night through to Tuesday evening.

While some areas will remain below warning levels, Met Eireann warns that there is a risk of localised spot flooding with a heightened risk of flash flooding in mountainous regions where accumulations are expected to be highest.

Met Eireann says this warning will be reviewed and may be elevated in further updates to reflect the evolving situation.

The alert is valid fro 00:01 Monday tov7pm on Tuesday.

The summary forecast is for low pressure to dominate for the rest of the week, bringing spells of wet and sometimes windy weather.

Mostly dry day with some sunny spells early this afternoon with just isolated showers mostly in the east and northeast. It will remain cloudier over Munster however, with occasional patchy rain and drizzle at times. Cloud will spread over all but the northeast of the country through by evening with patchy rain, becoming more persistent and widespread later, especially in the west and north. Highest temperatures of 12 to 15 degrees in light to moderate south to southeast breezes.

Rain will spread to the northeast early before clearing away through the night. Elsewhere, there will be some patchy light rain or drizzle at first, a further band of persistent and occasionally heavy rain will move into the southwest later in the night. Generally cloudy conditions will keep minimum temperatures around 8 to 12 degrees. Light to moderate southerly winds will gradually freshen overnight, becoming strong near coasts later.

Tomorrow will be a wet and blustery day. Bands of persistent rain will across the country becoming heavy at times, especially in the west and north. There will be a risk of spot flooding while there will be a heightened risk of flash flooding in mountainous regions. Fresh southerly winds will persist through the day, with stronger winds near coasts. Highest temperatures of 12 to 14 degrees.

Widespread persistent rain early on Monday night, with further heavy falls maintaining the risk of river and surface flooding. Rain will continue across the northern half of the country through the night, but across the south it will turn drier with some clear spells developing. Lowest temperatures of 9 to 12 degrees. Fresh to strong southerly winds will affect southern and eastern coastal areas.

Tuesday: Low pressure is currently forecast to move northeastwards over Ireland during Tuesday, causing strong southerly winds in the south and east. Heavy and persistent rain in northern areas on Tuesday morning is expected to clear away to the north during the morning, but through the rest of the day further outbreaks of heavy rain are forecast to move northeastwards across the country as the low pressure system tracks over Ireland. Highest temperatures of 13 to 15 degrees.

Drier conditions will then develop on Tuesday night with temperatures decreasing to between 7 and 10 degrees. Winds will ease in most areas, but strong northerly winds will develop along western and northern coasts.

Wednesday: Wednesday will be a cooler day with moderate to fresh northerly winds, strong along western and northern coasts for a time. Highest temperatures of 10 to 13 degrees. Cloudy with some scattered showers at first, but brightening up to good spells of sunshine as the day goes.

Wednesday night: A cold, dry and clear night with frost likely in many areas. Lowest temperatures of 0 to 4 degrees.

Thursday: A bright but chilly start to Thursday morning. It looks like Thursday will be a mostly dry day with good spells of sunshine, but cool with highest temperatures of just 9 to 11 degrees.

Further outlook: Current indications are for unsettled conditions on Friday and the weekend with further spells of wet and occasionally windy weather.