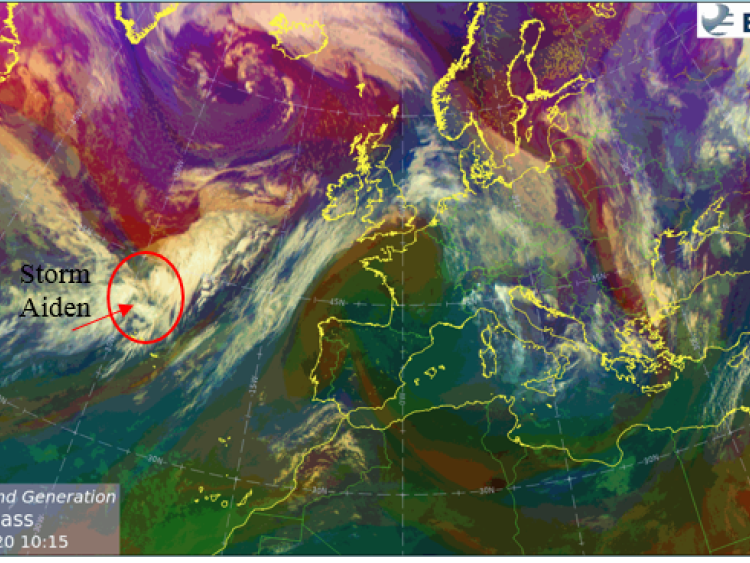 Met Éireann has upgraded its Halloween weather warnings to Status Orange and declared one of a trio of weather fronts due to hit Ireland this weekend to be the first winter storm - naming it Storm Aiden.

The worst of the weather is due on Saturday with two Status Orange warnings for most coastal counties and some inland parts of Leinster. The rest of the country has been placed under a Status Yellow alert. MORE BELOW TWEET.

The warning is valid from 5am to 10pm on Saturday, October 31.

A second similar Status Orange wind warning has also been issued for Saturday morning and afternoon for Donegal, Galway, Mayo, Sligo and Clare. It warns of severe and damaging gusts of 100 to 130km/h. The warning is valid from 8 am to 4pm on Saturday.

Meanwhile, a Status Yellow warning is in place for all of Ireland. It warns that strong to gale force southerly winds will veer westerly. Some severe gusts are possible. It is valid from 1 am to 3pm on Saturday.

The forecaster described what is behind the wild weather in a commentary by meteorologist Gavin Gallagher, of the Forecast Division in Met Éireann.

"Wet and very windy weather over the Halloween weekend as a series of vigorous Atlantic weather systems pass close to Ireland.

"After a settled day on Friday we will have a very unsettled spell of weather from Friday night through to Monday evening, with 3 separate low pressure systems tracking close to Ireland, bringing wet, windy and possibly stormy weather. Each system is around 24 hours apart, with the first impacting Ireland Friday night into Saturday, the next Saturday night into Sunday, with the third later Sunday into Monday.

"So this is not just one event, but rather a series of low pressure systems affecting us over a three-day period, with cumulative impacts from rainfall, strong winds and high seas," said Mr Gallagher.

The Meteorologist said we will feel the force of another former hurricane over the weekend.

"One of the depressions that will impact us will be the remnants of ex-hurricane Zeta, which is currently (Thursday 3pm) over the eastern United States," said Mr Gallagher. MORE BELOW TWEET.

#StormAiden has been named by Met Éireann for Halloween. Orange & yellow wind warnings are in effect for Sat. Potential for severe & damaging gusts.

Satellite below shows the position of #StormAiden in the Atlantic pic.twitter.com/mblYdArK0B

Met Éireann NATIONAL FORECAST issue at 8.57am on October 30.

A clearance to bright spells and isolated showers will extend across the country from the west this morning. Bright spells and just a few well-scattered showers for the afternoon and evening. Maximum afternoon temperatures ranging 10 to 13 degrees in moderate southwest or west winds.

A dry and mostly clear start tonight. However, it'll become wet and very windy later as rain sweeps northwards over the country accompanied by strong to gale force south or southeast winds. Some severe and potentially damaging gusts occurring towards dawn. Lowest temperatures of 4 to 7 degrees, occurring early in the night but turning much milder later with temperatures of 11 to 14 degrees by dawn on Saturday.

SATURDAY (HALLOWEEN)
Wet and very windy on Saturday morning with spells of rain. Severe and potentially damaging gusts for a time with weather warnings in operation. It will continue windy during the afternoon with a mix of dry periods and squally showers. Becoming mostly dry by evening with winds moderating. Highest temperatures of 12 to 15 degrees occurring early in the day but turning much cooler by evening. Strong to gale force south winds, veering west or southwest during the day. Very high seas around coasts with a risk of coastal flooding.

A further spell of wet and windy weather will spread from the Atlantic on Saturday night. Rain will sweep into Munster early on and extend nationwide early in the night accompanied by strong to gale force southerly winds. Minimum temperatures of 4 to 7 degrees, coldest early in the night over Ulster. MORE BELOW TWEET.

#StormAiden has been named by Met Éireann for Halloween. Orange & yellow wind warnings are in effect for Sat. Potential for severe & damaging gusts.

Sunday: Rain will clear north-eastwards on Sunday morning to leave it predominantly dry for a time with bright spells and just the isolated shower. However, another pulse of heavy rain will extend across the country during the afternoon and evening. Maximum temperatures of 10 to 15 degrees in fresh to strong southwest winds, potentially increasing to gale force. Rain will persist overnight with a risk of some localised flooding. Very mild air moving in across the south of the country but cooler in the northwest. A risk of very strong winds developing for a time.

Monday: It is expected be a cool and windy day on Monday with bright spells and widespread squally showers. Isolated thunderstorms in Atlantic coastal counties. Highest temperatures of 7 to 11 degrees in fresh to strong southwest or west winds. A mix of clear spells and showers on Monday night, the showers frequent in Atlantic coastal counties but more isolated elsewhere. Minimum temperatures of 2 to 5 degrees in moderate southwest winds.

Tuesday: Another breezy day on Tuesday with a mix of bright spells and passing showers. The showers again most frequent in the west and north of the country with a continued risk of hail and thunder. However, many eastern and southern counties will have a largely dry day. Highest temperatures of 7 to 10 degrees in fresh westerly winds. Clear spells and scattered showers overnight. Minimum temperatures of 2 to 5 degrees.

Wednesday: Early indications suggest high pressure will ridge in from the Atlantic on Wednesday bringing a mostly dry day with bright spells.