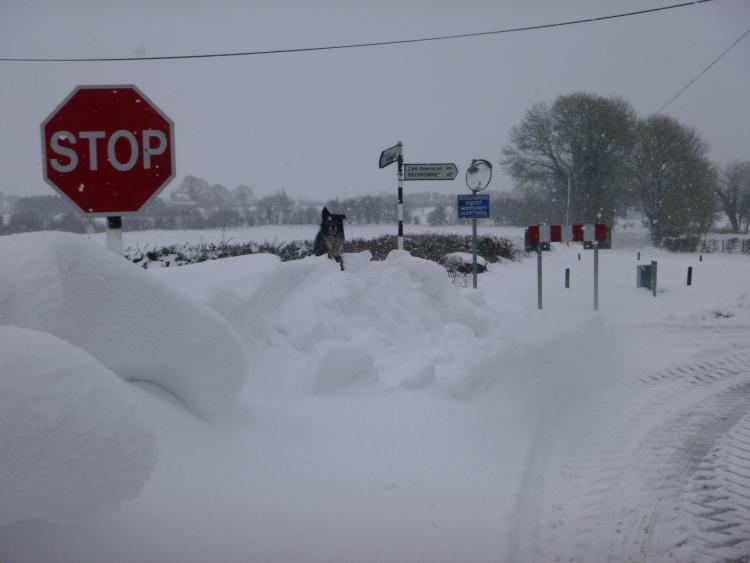 Widespread snow is not on Met Éireann's latest forecast but there will be wintry showers and sub-zero temperatures with a new weather warning issued for snow, ice and wind along the west coast.

The forecaster says the summary outlook if for it to remain "very cold with frost and ice" through the weekend. It says there will be some wintry showers, but overall a lot of bright winter sunshine.

Donegal, Sligo, Leitrim, Mayo and Sligo were issued with new snow-ice warnings on Thursday morning. The forecaster has also issued wind weather warnings for all counties from Cork to Donegal on the Atlantic coast for Friday. WARNING DETAILS HERE.

However, the forecaster issued a Weather Advisory on Tuesday, December 1. It warns cold weather for the rest of the week with sharp to severe frosts and icy stretches with some wintry showers too. It is in force from 4 pm on Wednesday, December 2 to midnight Friday, December 4.

Carlow Weather's Alan O'Reilly expects something similar and explained why. He says charts show Atlantic ridge with Jet Stream dropping south and cold air plunging down from the north.  He expects a low system on Friday to bring some wintry showers but mainly on high ground. MORE FORECAST DETAILS FOR THE WEEK AHEAD BELOW TWEETS.

The white stuff has arrived. ❄️❄️❄️ Here is a great photo of some snow capped mountains near Newport, Co. Mayo. A Status Yellow snow/ice warning is currently valid for Co. Mayo and other north-western and western counties. More information here: https://t.co/Xg3aMJlyuS pic.twitter.com/HoQ9Ydx2LX

Interesting to see how the Jet Stream is forecast to move over the coming days. We are currently South of the Jet but by Wednesday we are North of it as cold air pushes down over us. pic.twitter.com/dMo2obMMRY

An interesting setup in the weather this week. Charts show Atlantic ridge with Jet Stream dropping South and cold air plunging down from North. Low system on Friday could see some wintry showers but mainly on high ground. Stay up to date with weather forecasts this week. pic.twitter.com/HQ3Xtd64Nn

Here is our 10 day Atlantic Chart, showing the pressure and precipitation forecast in 6 hour intervals.https://t.co/9Giuj4CR5mhttps://t.co/9gKN6SVok4 pic.twitter.com/1V9Fh7bX7Q

Met Éireann national forecast issued at 9.28am on Thursday, December 3.

THURSDAY: Cold today with widespread showers early on, some of which will be wintry, along with isolated thunderstorms. Showers will gradually become confined to Atlantic counties during the afternoon, with some sunny spells developing. Showers will turn increasingly wintry as the day progresses with falls of hail, sleet and snow. Highest temperatures of just 3 to 6 degrees, coldest over Ulster, all in light to moderate west to northwest breezes.

Very cold tonight with widespread frost and some icy stretches. Much of the country will be dry but there'll be further wintry showers in Atlantic coastal counties, along with isolated thunderstorms. Lowest temperatures of 0 to minus 2 degrees, in light to moderate northwest breezes.

FRIDAY: A widespread frost to begin on Friday with some icy stretches on untreated surfaces. It'll be a cold and increasingly windy day with sunny spells and further scattered wintry showers, these mainly in Atlantic coastal counties at first but affecting many areas by evening. Highest temperatures of just 4 to 7 degrees in freshening north or northwest winds, increasing strong and gusty with gales developing at sea.

Friday night will bring scattered showers, some wintry, especially in the north and east. Feeling very cold owing to an added wind chill factor, in brisk northerly winds. Lowest temperatures of 0 to 4 degrees Celsius. Some frost too, though mainly for sheltered areas.

SATURDAY: Saturday will bring further scattered showers. Some good sunshine developing through the day too, especially away from eastern and western counties. Breezy to start, with moderate to fresh northwest winds, but winds will moderate during the day. Highest temperatures of 5 to 8 degrees Celsius with an added chill factor.

Some lingering showers in eastern coastal areas overnight, but most areas will be fully dry under clear skies. Very cold with lowest temperatures of -3 to +2 degrees, with a widespread sharp frost. Mist and fog locally too, in light northwesterly breezes.

SUNDAY: Sunday should be a largely dry day with light northerly breezes and plenty of bright winter sunshine. Some showers may present though, with eastern fringes most at threat. Another cold day with highest temperatures of only of 3 to 7 degrees Celsius. Continuing cold on Sunday night with frost and ice, as temperatures drop to around freezing countrywide.

FURTHER OUTLOOK: Remaining cold with more in the way of cloud and rainfall. Further frost and possible ice at times.