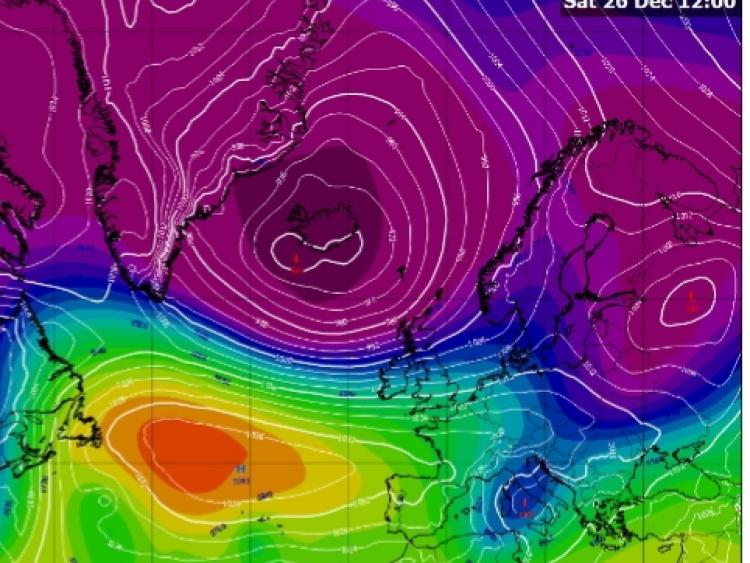 Met Éireann has upgraded weather warnings for Storm Bella which is set to hit Ireland on St Stephen's Day.

The forecaster has also put people on notice of wintry weather the storm will drag over Ireland in its wake.

Met Éireann warns that on Saturday, St Stephen's Day, through the late afternoon, evening and night, westerly winds associated with Storm Bella (named by UK Met Office) will reach mean speeds of 50 to 65km/h with gusts of 90 to 110km/h.

Gusts will be higher at times near the west coast. With the combination of strong winds, high waves and forecasted storm surge, there is a risk of coastal flooding.

The warning is valid from 3pm on Saturday until 4am Sunday.

The alert says heavy rain associated with Storm Bella (named by UK Met Office) will move southwards over Ireland and may cause localised flooding in some areas through late Saturday afternoon, evening and night.

The warning is valid from 3pm on Saturday until 4am on Sunday.

Here is our 10 day Atlantic Chart, showing the pressure and precipitation forecast in 6 hour intervals.https://t.co/9Giuj4CR5mhttps://t.co/9gKN6SVok4 pic.twitter.com/WxFOZecRdn

Heavy rain will clear southwards and it will turn much colder overnight. Clear spells and scattered wintry showers will extend across the country before dawn on Sunday with some ice forming in sheltered areas. Minimum temperatures of 0 to 4 degrees in strong and gusty west to northwest winds.

Sunday: Sunday will be a cold and blustery day with bright spells and scattered showers, some wintry in nature. Highest temperatures of 4 to 7 degrees in fresh to strong and gusty west to northwest winds.

Cold with frost and icy stretches at night in places with lowest temperatures of -2 to +1 degrees. Showers will become fairly widespread during the night, turning wintry in places as strong to gale force northwest winds develop.

Monday: Cold and windy on Monday with widespread showers, possibly wintry on high ground with a risk of hail. Highest temperatures of 5 to 8 degrees but feeling much colder owing to the added wind-chill factor in strong and gusty northwest winds.

Staying cold and blustery overnight with a mix of clear spells and scattered showers. Minimum temperatures of 0 to 4 degrees in fresh northwest winds.

Tuesday: Another cold and blustery day is forecast for Tuesday with a mix of bright spells and showers, some possibly wintry but generally of rain or hail. Highest temperatures of 4 to 7 degrees in fresh northwest winds.