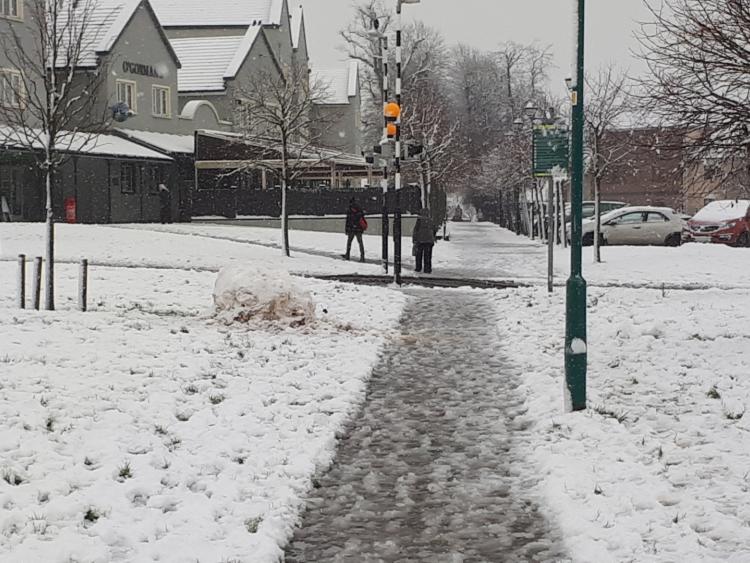 Met Eireann has issued a snow ice warning for counties in all provinces but Leinster looks set to be worst hit by the cold snap that looks set to last through the New Year.

The warning, issued at 11 am on Tuesday, says there is a risk of snow accumulations to lower levels.

The alert is valid from midnight Wednesday to noon on Wednesday.

Met Eireann's forecast overview is for cold and showery to persist with widespread frost and ice by night.

TUESDAY: Cold and blustery today. There'll be sunshine and scattered showers, with a risk of hail and falling as sleet and snow over high ground. Showers mainly across the western half of the country this morning, will drift eastwards during the afternoon, becoming more isolated. Highest temperatures of 4 to 6 degrees in fresh and gusty northwest winds.

There'll be good clear spells tonight as showers retreat to Atlantic coastal counties. Turning frosty and icy early in the night with lowest temperatures of minus 3 to zero degrees. Winds will fall light and back westerly, becoming variable in direction by morning. Soon after midnight, rain will develop in western coastal counties and extend eastwards over central and southern counties, turning to sleet and snow in some areas.

WEDNESDAY: An icy start for many on Wednesday. Rain, sleet and snow across the southern half of the country will clear southeastwards during the day with bright spells and scattered wintry showers following from the northwest. A cold day with temperatures generally only rising a little above freezing and only a little less cold at coasts. Winds will be generally light or moderate, varying in direction and becoming northerly later in the day.

Thursday (New Year's Eve): Cold and breezy on Thursday with sunny spells and passing showers, these mainly affecting Atlantic coastal counties with a risk of hail and thunder. Maximum temperatures generally ranging 2 to 6 degrees in fresh north or northwest winds. Frost and ice developing again on Thursday night with lowest temperatures of -3 to +2 degrees. Many areas will be dry and clear but showers will affect some Atlantic coastal areas and may drift onto Irish Sea coasts for a time.

Friday (New Year's Day): New Year's Day will dawn cold and frosty. It'll be a bright day with good sunny spells but also some passing showers, possibly wintry on high ground. Maximum temperatures of 3 to 6 degrees in moderate northerly winds. Most areas dry overnight with a sharp frost and ice. However, a few showers will affect Atlantic coastal counties and may drift onto some southeastern coastal areas. Minimum temperatures of -3 to 0 degrees in moderate northerly breezes.

Saturday: After a cold and icy start, Saturday will bring plenty of dry and bright weather with crisp sunshine and just a few coastal showers. Highest temperatures of 3 to 6 degrees in moderate northerly breezes. Widespread frost and ice overnight with lowest temperatures of -3 to 0 degrees. It'll be mostly dry with just a few showers in coastal parts of the north and east.

Sunday: Current indications suggest Sunday will be another cold day with sunny spells and just isolated showers of rain or hail. Maximum temperatures of 2 to 5 degrees in moderate northerly winds.