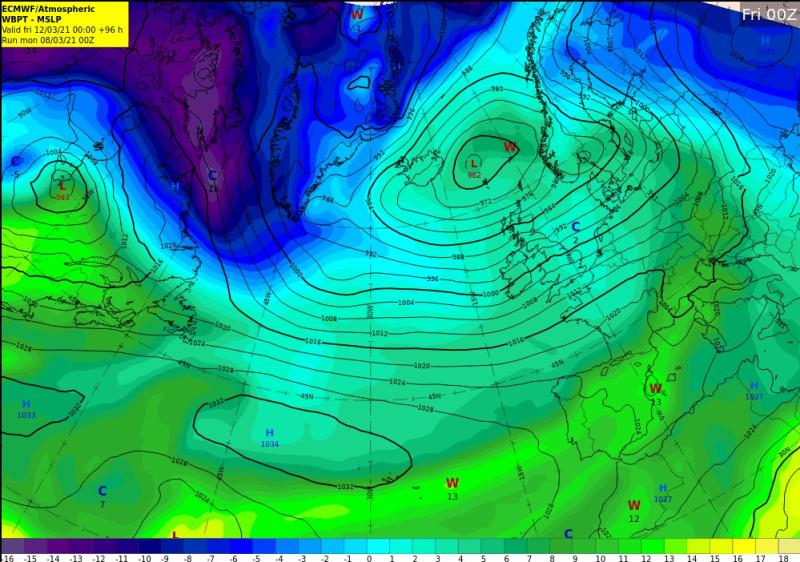 Met Éireann has issued a weather warning for all counties ahead of a bout of stormy weather heads towards Ireland and snow is also possible in parts with one of its forecasters saying cold weather could bring 'wintry' showers later this week.

The Status Yellow wind warning says it will become very windy from Wednesday afternoon through until Thursday morning.

The alert says southwest winds will veer westerly gust at 90 to 110km/h generally, higher at times on hills and coasts in the south and west with a risk of some wave overtopping.

The alert is valid from noon Wednesday to 7am Thursday, March 10 - 11. More below picture. 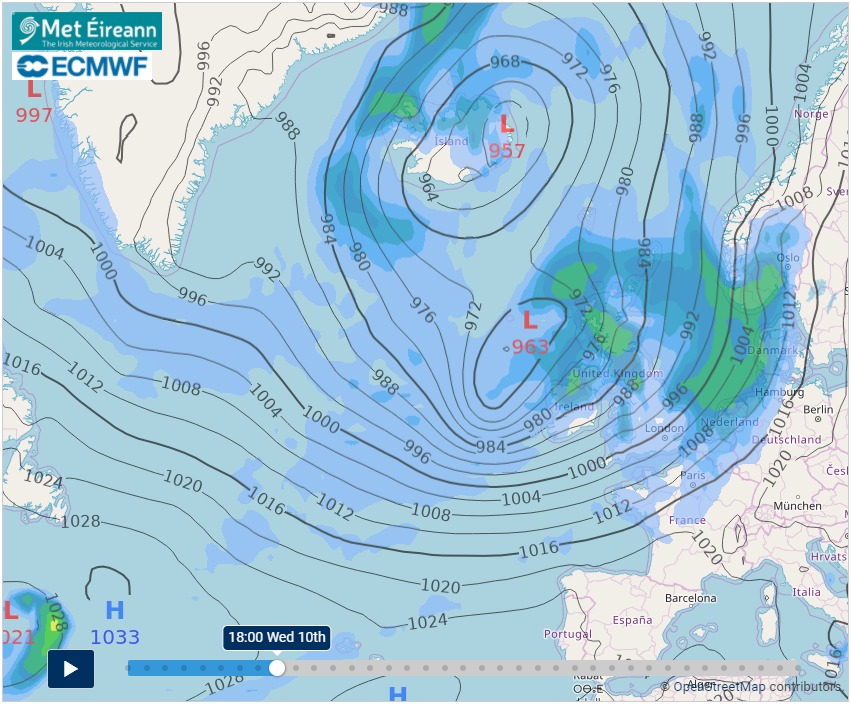 The forecaster has also issued a commentary on what to expect through the week.

It says that after a quiet start to meteorological spring, conditions will turn much more unsettled this week with spells of wet and very windy weather on the way.

It says high pressure has brought largely dry and settled weather since the start of March, but as the jet stream moves over Ireland in the next few days this will steer a succession of Atlantic low-pressure systems towards us.

Met Éireann meteorologist, Paul Downes, said Monday was the last day of the settled weather with wet and windy weather expected through the rest of the week.

“Rain and strong winds will push east across the country from Tuesday afternoon, becoming widespread by early evening.  Further wet and very windy weather is expected on Wednesday as a deep low-pressure system tracks to the northwest of Ireland – bringing very strong south-westerly winds and spells of heavy rain through Wednesday afternoon and Wednesday night.

“During the early hours of Thursday, this low-pressure system will clear away from Ireland, introducing a colder and more unstable airmass.  However, it will remain very windy into the weekend along with blustery showers, these possibly turning wintry over high ground,”

Met Éireann forecast charts show that by Friday, March 12 a cooler polar maritime airmass will settle over the UK & Ireland.

Turning unsettled this week with areas of low pressure in the Atlantic moving towards Ireland bringing spells of wet ️☔️and windy weather.

NATIONAL FORECAST ISSUED BY MET ÉIREANN ON MARCH 9 AT 8.53AM

TUESDAY: Cloudy today with rain moving in from the Atlantic to affect west Munster, Connacht and west Ulster this morning. Rain will extend eastwards to remaining counties this afternoon. Southerly winds increasing strong during the afternoon, reaching near gale force along coasts. Highest temperatures of 8 to 11 degrees.

Continuing wet and windy for the early parts of the night. Rain will clear eastwards overnight with a few showers following and limited clear spells. Strong southerly winds will ease light to moderate and veer westerly in the clearance of the rain. Lowest temperatures of 2 to 5 degrees, coldest in the north and northwest later in the night.

WEDNESDAY: Wet and windy tomorrow. Outbreaks of rain will quickly return to the west early in the morning, becoming widespread by midday with some heavy falls. Frequent heavy showers will follow later in the afternoon with occasional brighter breaks in the cloud. Strong and gusty southwest winds will develop during the afternoon, reaching near gale force in southern and western coastal counties. Highest temperatures of 10 to 13 degrees.

Very windy on Wednesday night, mainly across Munster and parts of Connacht and Leinster. Widespread showers and longer spells of rain with some heavy falls. Southwest winds will be strong to near gale force and gusty with some strong gusts in the southwest for a time. Lowest temperatures of 3 to 6 degrees. Winds will moderate overnight becoming fresh and gusty and westerly.

Thursday: Remaining quite windy with frequent blustery showers and sunny spells. Showers will be squally and heavy, some with hail and thunder. Wintry falls possible on hills. Highest temperatures of 7 to 10 degrees with fresh and gusty westerly winds.

Friday: Breezy with further showers, some showers will be heavy. Bright or sunny spells in the morning, becoming cloudier during the day. Highest temperatures of 6 to 9 degrees with moderate to fresh and gusty southwest breezes.

A spell of rain will move in from the west early on Friday night becoming windy again also. Rain will clear overnight followed by frequent showers. Lowest temperatures of 2 to 4 degrees with fresh to strong southwest winds, strongest in the southwest.

Saturday: A day of showers with occasional bright spells in a fresh westerly breeze, risk of showers being heavy, possibly wintry. Highest temperatures of 5 to 7 degrees. Becoming drier overnight and cold, with lowest temperatures in the low single digits bringing a risk of frost to some parts.

Sunday: Current indications suggest that it will remain breezy on Sunday with further rainfall, although it will be less cold with highest temperatures of 9 to 12 degrees during the day and no risk of frost at night.

Met Éireann advised that to get the most accurate and up to date 7-day, hourly forecast for your local area on the island of Ireland go to met.ie.  It says the latest weather advisories and warnings for Ireland are on the Met Éireann warnings page.