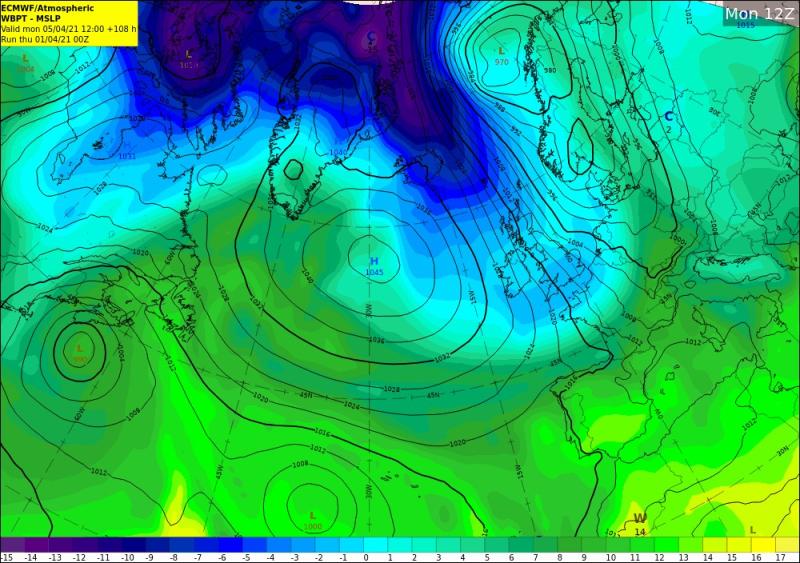 Forecast chart for Monday 5th April showing a colder, northerly airflow across Ireland (blue colours) that will bring wintry showers of hail, sleet and snow across the island.

Met Éireann has confirmed that cold weather from the artic will push in over Ireland causing temperatures to plunge sweeping wintry conditions over Ireland with snow in the mix after a very summer startEaster.

The unseasonal nature of the event has caused the forecaster to issue one of its Weather Commentaries.

It says the weather in the lead up to Easter weekend will be largely dry and settled with sunny spells for most.

"However later on Easter Sunday we’ll see a big change as much colder air arrives across the country, introducing the chance of wintry showers of hail, sleet and snow," warns the forecaster.

In is commentary Met Éireann meteorologist, Matthew Martin said high pressure will establish across Ireland in the run-up to Easter, allowing a spell of settled weather lasting until the first half of Easter Sunday.

“It’ll be largely dry with sunny spells for most, though there’ll be a bit of a temperature contrast – today and Good Friday we could see highs of around 15 to 18 Celsius across southern and western areas in the best of the sunshine, whereas northern and eastern areas will be notably cooler as easterly breezes keep temperatures at around 10 to 12 Celsius.

"These coastal areas may also see low cloud lingering through the first part of the day.  Saturday will be another dry day with good spells of sunshine and temperatures of around 10 to 13 Celsius, still feeling cooler though along northern and eastern coasts,” he says.

However, it will not last the forecast through Easter with change to colder conditions starting on Sunday.

“Easter Sunday will start dry with sunshine for most and whilst southern areas will continue to enjoy a dry and bright day, a cold front will introduce cloud and rain across the northern half of the country through the afternoon – it’s this cold front that opens the gates to very cold air from the Arctic from Easter Sunday night and through much of next week,” he says.

A forecast chart for Monday, April 5 showing a colder, northerly airflow across Ireland (blue colours) that will bring wintry showers across the island.

"The cold airmass will introduce the chance of wintry showers of hail, sleet and snow on Easter Monday and Easter Tuesday, with temperatures limited to around 3 to 7 Celsius.  Temperatures overnight will widely fall close to freezing with a touch of frost in places, which could cause problems for gardeners so take care to cover vulnerable plants and protect from frost damage.

"The cold snap could also pose challenges for farmers and so we’re encouraging farmers to keep an eye on our farming commentary ahead of the cold conditions arriving later this weekend," said the commentary.

For the most accurate and up to date 7-day, hourly forecast for your local area on the island of Ireland go to met.ie .

But whatever the weather Met Éireann urges people to please follow the public health advice and help keep everybody safe from COVID-19.