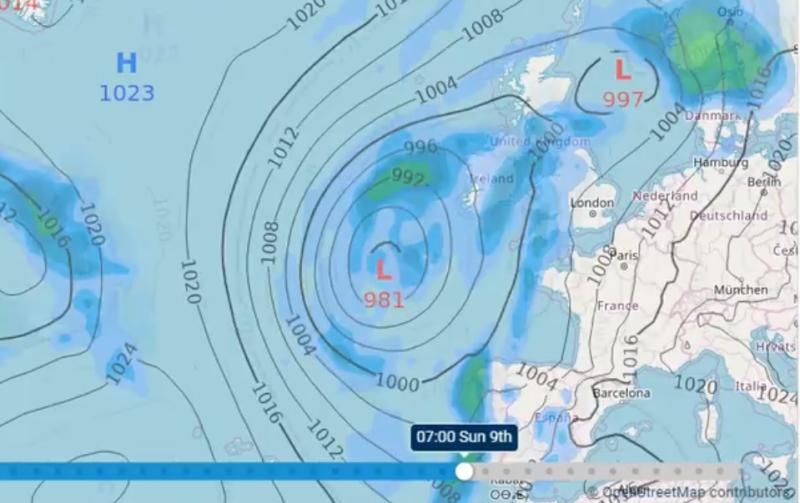 Another blast of stormy weather on the way

The Bank Holiday weather warning from Met Éireann could be a foretaste of things to come on the weather front this week a summer continues to struggle to make an appearance during this unseasonal May.

Met Éireann's forecast and charts for the coming seven days show the cold weather persisting through to Friday only to be replaced by milder but stormy conditions over the weekend just before Covid-19 restrictions are eased.

A commentary on Monday's stormy weather said the low-pressure system will clear eastwards away from Ireland later in the day with a northerly airflow re-establishing across Ireland.

"This will keep temperatures below average next week, around 8 to 12 degrees Celsius and it’ll stay on the unsettled side too,”  said Met Éireann forecaster, Andrew Doran-Sherlock.

Met Éireann's summary outlook says it will remain cool with showers and sunny spells in northerly winds. It warns that the frost risk remains throughout the coming week.

The forecaster's farming section says the week ahead is set to bring a change to a mobile Atlantic regime bringing unseasonable areas of low pressure crossing the country on Monday and potentially next weekend. As a result, rainfall totals are forecast to be between 2.5 and 4 times higher than normal, with parts of the northwest expected to record 60 to 80mm of rain in the next 7 days.

The tweet charts show unsettled and stormy weather blowing across the Atlantic with a worrying-looking system on course to strike next weekend.

️ and today, generally cool and showery for the week ahead.

MONDAY
Wet and windy this morning. The rain will clear eastwards with showers following this afternoon, some heavy or prolonged, especially over the northern half of the country. Fresh to strong, gusty southerly winds will veer westerly and later northwesterly, reaching gale force in coastal areas. Highest temperatures of 10 to 12 degrees.

TUESDAY
A cool blustery day with a mix of sunny spells and scattered showers. Some of the showers will be heavy with the risk of hail and isolated thunderstorms. Highest temperatures of just 9 to 11 degrees, with fresh and gusty northwesterly winds.

Showers will become confined mainly to the north and west on Tuesday night with long clear spells developing generally. Cold with lows of -1 to +2 degrees, with a touch of frost developing in light to moderate northwesterly winds.

WEDNESDAY: Another cool day with a mix of sunny spells and scattered showers. Again the showers will be heavy at times with the risk of hail and isolated thunderstorms, especially over the northern half of the country. Some showers may fall as sleet over high ground in the north and east. Highs of just 8 to 12 degrees, coldest in Ulster, in light to moderate northerly winds.
Very cold on Wednesday night with lows of -3 to +1 degrees, with frost developing.

THURSDAY: Cool with sunny spells. There will be a few scattered showers, but less than previous days with a lot of dry weather generally. Highs of just 9 to 12 degrees in a brisk northerly breeze.
Another cold night on Thursday night with some frost in lows of between -2 and +2 degrees.

FRIDAY: Friday will be mostly dry with some sunny spells through the morning. Cloud will increase through the day with the likelihood of some rain pushing into the southwest after dark. Highs of 10 to 13 degrees in mostly light winds, strengthening in the southwest later.
Rain will spread northwards to all areas Friday night in fresh southeasterly winds. Lows of 2 to 6 degrees.

SATURDAY: Rain clearing northeastwards to showers and sunny spells. A milder day with highs of 13 to 16 degrees in moderate southerly winds.