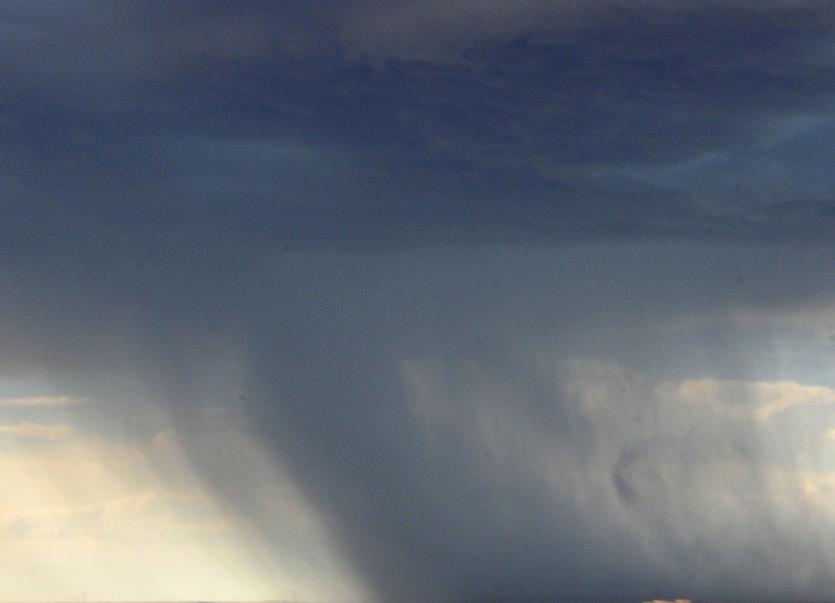 Thundery showers in the forecast

Met Éireann has issued the second Status Yellow weather warning for thunderstorms this week with most of the country set to be hit by heavy showers.

The latest yellow alert covers all counties in Leinster and Munster as well as Cavan, Donegal, Monaghan.

The alert was issued at 10:01am by the forecaster on Wednesday, May 12.

It warns of scattered thunderstorms on Tuesdays afternoon and evening, with a risk of hail and localised spot flooding.

It is valid from 1pm to 10pm on Wednesday.

The summary national outlook is for the unseasonal weather to continue. Met Éireann says it will remain unsettled for this week and next, with a mix of showers and sunny spells each day. Temperatures slightly below normal for May. MORE DETAILS BELOW TWEETS

TODAY (12-05-2021): Showers in Munster, south Leinster & in northern coastal counties this morning extending to all areas during the day.

Remaining unsettled for this week and next, with a mix of ️ and ☀️ spells each day. ️ slightly below normal for May.

WEDNESDAY
Cloudy this morning across much of Munster, south Leinster and in the north, with some outbreaks of showery rain, heavy in places. Mainly dry elsewhere for a time with some sunshine. While slow-moving showers will become more widespread across the country through the day, they'll be most frequent in parts of Munster and Leinster, with some thunderstorms leading to localised spot flooding and there's a risk of some hail too.

Scattered thunderstorms are possible elsewhere too. There'll be some spells of sunshine in the mix also in many areas. Highest temperatures of 12 to 15 degrees in mostly light easterly or variable breezes, becoming moderate northwesterly along western coastal areas.

Becoming mainly dry tonight with some clear spells, though there'll be a scattering of showers around, mainly in parts of the west and northwest. Lowest temperatures of 1 to 5 degrees in mostly light variable breezes with some mist and fog patches forming.

THURSDAY
Tomorrow morning will bring some sunshine and some scattered showers, mainly in western parts at first. However, the showers will become more widespread by the afternoon and many will be heavy and of hail. There'll be some thunderstorms too and a risk of spot flooding, especially in parts of the midlands, north and east. Highest temperatures of 12 to 15 degrees in mostly light variable breezes, moderate northwesterly in western and southwestern areas.

Becoming mostly dry with clear spells and a few scattered showers. Showers may become more frequent on the east coast later in the night. Lows of 3 to 6 degrees in light westerly winds.

FRIDAY: Starting mostly dry with sunny spells and showers. The showers mostly over the northern half of the country where some will turn heavy in the afternoon. Cloud will steadily increase from the southwest early in the day, with rain arriving onto the southwest coast by late afternoon. Rain will move northwards into Munster and Connacht through the evening. Highs of 13 to 16 degrees in a light southerly breeze, strengthening in the southwest later.
Rain will extend to all areas on Friday night. A mild night with temperatures not falling below 6 or 7 degrees.

SATURDAY: Rain and cloud will clear northeastwards on Saturday morning with sunny spells and showers following. Showers will become widespread on Saturday afternoon, and heavy at times with the risk of hail and thundery downpours. Highs of 13 to 16 degrees in moderate southerly winds.

SUNDAY: Another day of sunny spells and showers. Again the showers will be heavy at times in the afternoon, with the risk of hail and thunder. Highs of 12 to 15 degrees in moderate to fresh southwesterly winds.

EARLY NEXT WEEK: Remaining generally unsettled with a mix of bright spells and showers on Monday, Tuesday and Wednesday. Temperatures remaining slightly below average with highs of 12 to 15 degrees in light to moderate westerly winds.