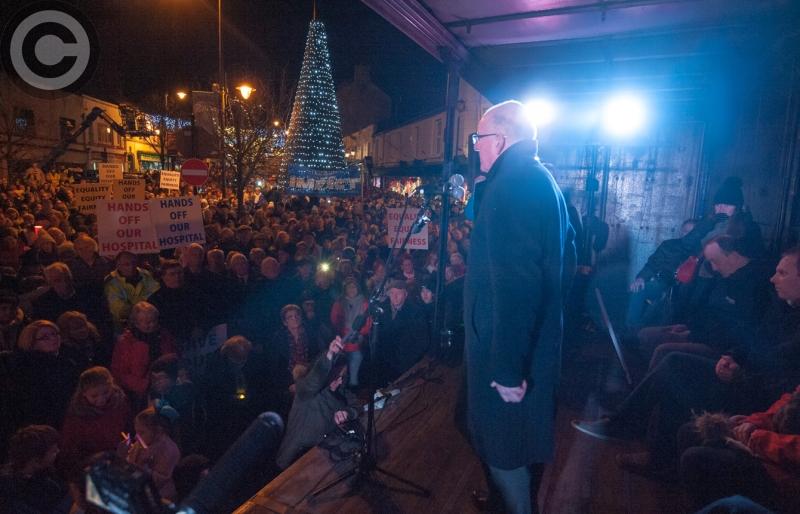 Charlie Flanagan at the Light for Lives Rally in Portlaoise. Pic: Denis Byrne

A meeting on the future of Portlaoise hospital between the Minister for Health Simon Harris and the three Laois TDs in unlikely to happen this week.

Deputies Sean Fleming and Brian Stanley said they had both made written and verbal requests to the Minister for meetings. Both said the spoke with Minister Harris.

Neither TD has received written responses to requests.

The Leinster Express asked the Department of Health if Minister Harris intended to meet the Laois TDs this week as was announced at the public meeting in Portlaoise last Saturday, December 2. There was not reply.

Minister for Justice Foreign Affairs Charlie Flanagan told the Light for Lives rally that a meeting would take place where all TDs would make that case against the downgrade of the hospital to the Minister.

"I met Simon Harris regarding MRHP on Monday and I spoke to him again on Tuesday with further updated information to assist in the decision making. Meeting with Simon Harris & 3 TDs likely to be next week," said Minister Flanagan.

RTÉ's PrimeTime broadcast a feature on the hospital on Thursday, November 7.

The HSE's Dublin Midland's hospital Group plan for Portlaoise envisages the removal of A&E, ICU, maternity, paediatrics and most surgery from Portlaoise.

The Minister for Health has the power to reject this plan.