Mountmellick flood victim says insurers made her feel 'like a criminal' 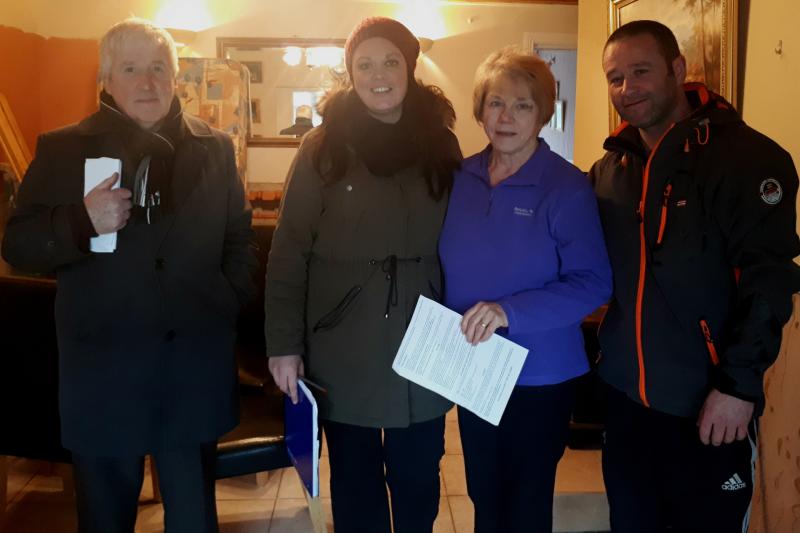 Kathleen O'Neill (third from right) pictured with volunteers from the Mountmellick Flood Community Support group in her home on Manor Road which suffered flood damage.

Kathleen O’Neill is one of the many Mountmellick Flood victims living on Manor Road and she said that she was so ‘bamboozled’ and ‘tormented’ dealing with her car insurance company that she is never going to bother driving again.

Speaking to the Leinster Express three weeks after the flooding hit her home on November 22, Kathleen said that the process of losing her car to flood damage was so stressful that she couldn’t deal with going through it ever again. She said that the car insurance company made her feel “like a criminal”.

“My car is gone, it was flood damaged. It was fully insured, I can claim a bit on that but they couldn’t put it back on the road it was too dangerous with the electrics getting wet.

“They never left me alone about it so I said here, let it go for scrap, it had to go and I am going to claim it I wasn’t going to but I never had so much as a parking ticket in my life now I have decided I am finished driving I couldn’t be bothered any more.

“I couldn’t go through it, it was absolutely horrendous all the talk, I never had a parking ticket and yet I felt like a criminal with all this on top of me so I said here I have had enough,” she said.

Kathleen has lived in her home on Manor Road for 44 years and she grew up next door. She said that the flooding has never been as bad as it was in November.

“There was water and floods from time to time but you could deal with them because you knew and you could put the sandbags at the front and back door. If it had of come during the night we would have been really in a bad state,” she said.

Kathleen said that the last two to three weeks of stress have made her feel like she has Alzheimers.

“Going up and down town and with the torment of the car and everything I couldn't remember what I was doing, every time I went to go down to where we were staying I went the wrong way, I couldn’t believe it I was thinking ‘I must have Alzheimer's’

I actually thought that. I left things behind me, I never knew what stress was in my life.

Kathleen has also felt like giving up with the house insurance.

“We haven’t heard officially now we are going on the assumption that we are not getting it but there is no email, no nothing.

“We had an accessor here for three days we did everything we were supposed to do,” she said.

Chanele Kavanagh has been on the ground helping flood victims from day one. She said that insurance companies have a lot to answer for.

“If insurance companies are quick enough to take money off people and know that they are in a flood risk are they should be quick enough to hand it out. They are not even answering calls to some people.

“People are going through enough stress without having to chase insurance companies,” she said.

“Laois County Council looked after us we got €200 cheque and €130. We bought a motor for the central heating and I bought duvets. Paddy Bracken has been up here he got our septic tanks emptied out, he is up and down the road everyday, coming to see how we are doing,” she said.

Kathleen is hoping to at least have her sitting room back by Christmas and maybe even get a Christmas tree up in time.