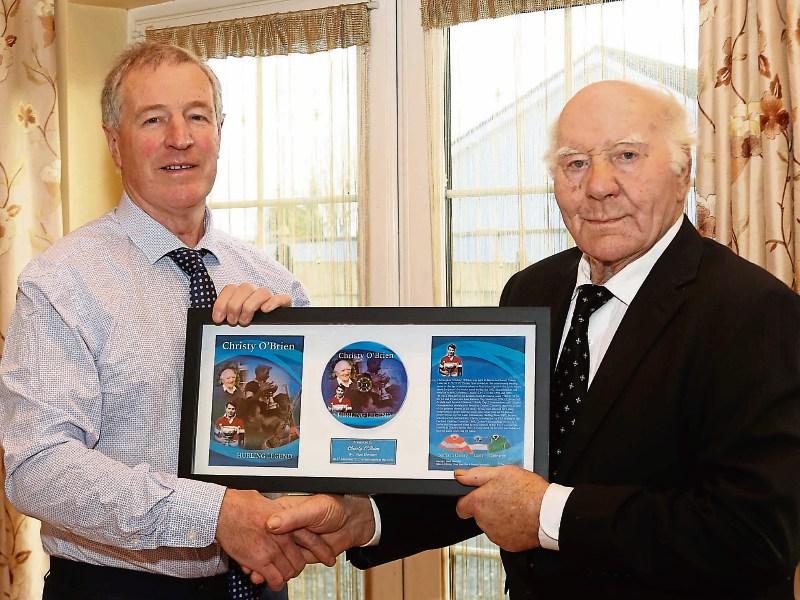 A very successful night was held at The Racket Hall Hote recently, where a DVD celebrating the achievements of one of Laois and Leinster’s finest hurlers, Christy O’Brien, was launched by Noel Sheridan.

Noel has been working at this project along with Terence Smeaton for the last 12 months. Speakers on the night included Christy O’Brien, Jack Nolan and Jim Kelly.

The DVD features an interview by Jack Nolan with Christy on his life and times from his youth to the present day. Also featured on the DVD are Christy’s colleagues from the 1956 team which won the first SHC Final for Borris-in-Ossory. There are also many other pleasant surprises on the DVD.

The door-prize winner was Des Daly and raffle prize winners were Joe Delaney, Sal Cuddy, Stephen Fahy, Mick Murphy, John Brown, Joe Coogan, Pat Campion and Kathleen Phelan. An auction was held during the night for signed hurleys by Christy and for a Laois GAA Season Ticket, and our thanks to all who bid and congratulations to the successful bidders.

Special Thanks to Christy O’Brien and family for all their help and patience throughout the making of the DVD. Thanks to all who provided entertainment on the night, the bands and individual singers, to all who donated and sponsored the event, Fr Jackie, Racket Hall Hotel, Laois GAA, Kelly's Bar, Martin Keane, Sadie Sheridan, James Kelly MCC, Green Roads Bar, Daybreak B-i-O, John King MCC, Paddy Campion Hurleys, Kelly Machine Spares, Brendan Phelan MCC, Kellehers Electrical, B-i-O GAA, Sals Diner, and to all who bought tickets for the launch, all who bought raffle tickets and to all who attended.

Proceeds from the sale of DVDs are going to Local Infrastructure Projects. There are only a limited number of DVDs available of this historic record, and they can be purchased in the local shops at €15 each. For further details contact Noel Sheridan (087-2982880) or Canice Sheeran (087-2071267).