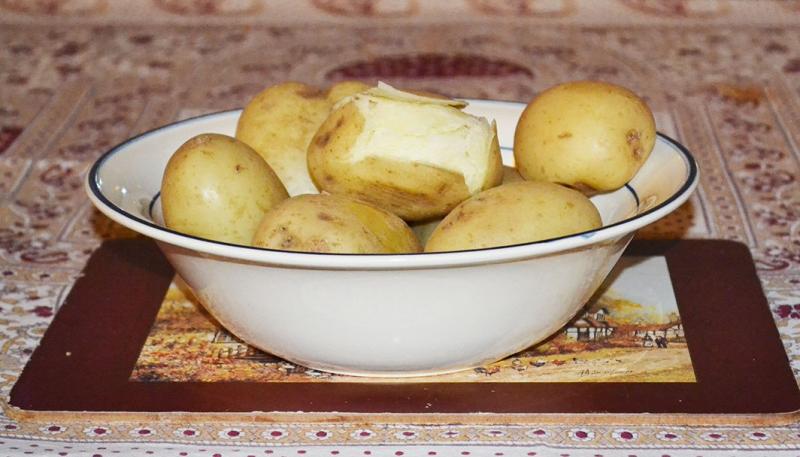 Oh for a floury spud

What is this fetish we have in Ireland for floury potatoes? What is it that compels people to drive all the moisture from the humble spud?

Well, I don't get it. As far as I'm concerned its just some ball of insubstantial fluff on my plate. It's one usually joined by equally poor, overcooked vegetables and if you're lucky a piece of cremated mammal flesh.

Yes, de-watered Irish potatoes drier than lunar dust. Four billion years of cosmic time would not drive the moisture from a potato as effectively as an Irish . You'd find more water on the surface of the moon than you would on a plate of “cooked in their skin” Irish spuds. So dry in fact, the poor victim will need a of water, three grams of salt and two ounces of butter just to get one down their neck.

I may be a little disparaging to the Irish kitchen, and unfairly so. Times have changed. We have pasta and rice. We have alternatives. We have fresh garlic and chile sitting on our kitchen counters next to the turnips and parsnips. Ciabatta's sit side by side with traditional soda bread...

Soda bread, I can't stand soda bread. It needs to be smothered in butter and homemade jam before it's even possible to eat. To offer me a piece of soda bread without a whole pot of tea to help it on its way is cruel and unusual punishment. It would be like giving some poor auld eejit, crawling on his knees in the Gobi desert a packet of cream crackers, and him there dying of the thirst.

'Here, get those down ya, you'll feel a lot better.'

Tea. What the hell is it about tea anyway? No matter what the occasion, time or place, it's always with the damn tea. Going out for the night? “Would ya have a cup of tea before ya go?”

'No, no no. I'm going out to consume beer in the hope it clears the blockage of floury potato still stuck in my craw. Why on earth would I want tea?

thing then happens on your return.

“Would ya like a cup of tea there before ya go to bed?” Well naturally. There is nothing I'd like more after four pints, three Jameson's and a packet of dry roasted than a cup of tea.

Don't get me wrong, I like a cup. It's lovely in the morning. A perfect accompaniment to toast liberally plastered in butter and marmalade, nothing finer in my opinion. But unlike the wind required to drive one of those new swishy wind turbines, I don't need it to drive me. I don't need it to turn my blades... Besides, I've always preferred coffee anyway.

Grand, there's another thing. Grand. What is it with that word. “It'll be grand, have a cup of tea.”

My friend fell one evening while the two of us were egressed our local. There was blood running from his nose like water over that hydroelectric dam in Ardnacrusha.

'Are ya alright there Seanie,' I enquired.

'I'll be OK in a minute, just need to catch ,' he said as he brushed himself off.

'But, yer covered in blood and yer looking a wee bit pale there Sean,' says I.

Oh Ireland, I love Ireland. The country of my birth. It's people it's green lush countryside. warbling, tweeting, whistling, cawing hedgerows. It's incessant rain that falls like... well... It falls like rain between those showers that in their turn fill voids between downpours. Yes, Ireland, beautiful wet rainy Ireland... We'll have a cup of tea, it'll be grand and the rain might stop. What time's the dinner anyway?

Weather, don't even get me started on the weather...