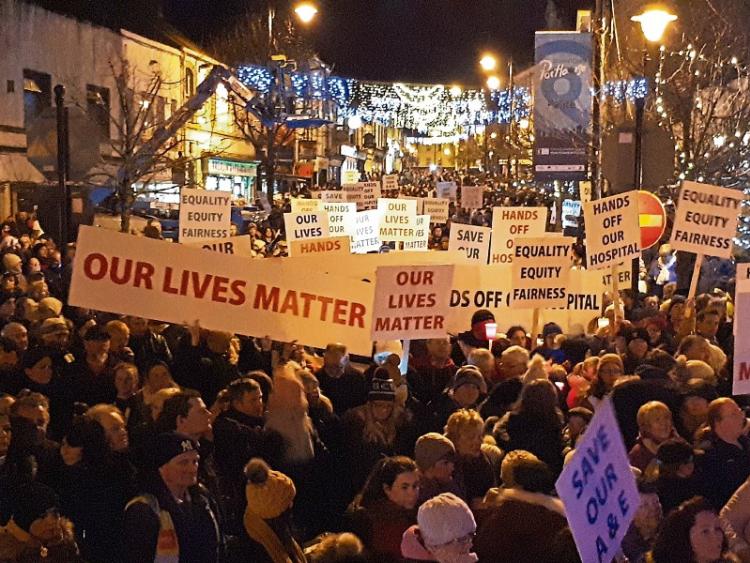 Saturday night December 2, 2017 will be remembered for many years in Laois.

On the night thousands of people answered the call of the Portlaoise Hospital Action Committee to march for their hospital.

Over the years people in Laois and other counties have always stood by the hospital.

But the turnout for the Light for Lives rally was unprecedented.

Our Lives Matter, Hands off our Hospital, Equality Equity Fairness, were the messages on the placards carried by many in the huge crowd that descended on the town centre.

Men and women of all ages and children marched to the town's lower Square to make sure Laois politicians got the clear message that the fight for the hospital has to be won.

Portlaoise Hospital Action Committee Chairman welcomed Minister Charlie Flanagan, Brian Stanley and Sean Fleming to the podium but he had a stark warning.

“We are not going to take this lying down. Woebetide on them if our A&E is closed,”he said to huge applause.

The month ended with the Minister for Heatlth direction that there should be consultation with the public and local doctors on the hospital's future.

A skirmish was won but the battle for service retention at Portlaoise will be long and hard.

In other December news, Laois was covered with a blanket of snow that hit the county during a seasonally cold snap.

The county was brought to a stanstill as Met Éireann warned warned of hazardous and treacherous driving conditions.

There was consternation among parents on social media at the refusal of many schools to close.

The Deparment of Education leaves the decision to boards of management.

There was high absentee rates is schools that did open and bus services did not run until a thaw made roads safe.

Meanwhile, the sacraficemade by five Laois Offaly Divsion Gardaí was honoured in December.

The gardaí were honoured four decades after they were blown up in an IRA bomb near Portarlington.

Garda Clerkin was killed instantly while the other men suffered serious injuries.

“It is a wonderful day. It will help alot and was really and truly worth waiting for,” said Ben Thornton.