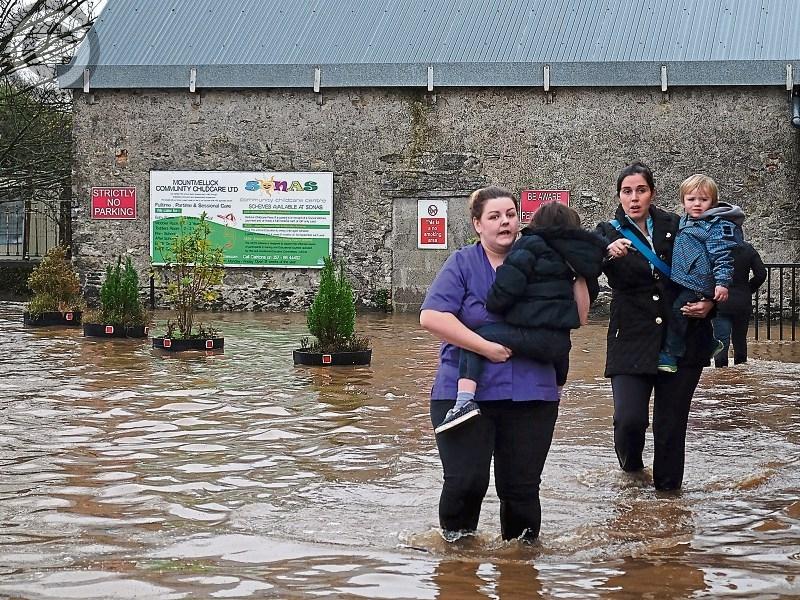 Two big stories dominated the headlines in November while the criminals left there mark and forced an unpredented response from gardaí in the Laois Offaly division.

The Leinster Express was on the scene early in Mountmellick on Wednesday November 22 to witness first hand that chaos and devastation caused by flooding that engulfed the town.

The warning signs were apparent from early when two primary schools were forced to close after sewerage backed up into the toilets.

Fire service were on the scene early to deal with the first of many emergencies.

Next up, the outskirts of the town began to be hit with Laois Civil Defence also called upon evacuate people from their houses.

By early afternoon and with rivers having broken banks and farmland flooded the town began to flood. The main road into the town from Portlaoise flooded at Irishtown as did Patrick Streetbut the worst hit areas were O'Moore St and Manor Road areas.

Therese Dowling was evacuated at 4pm.

“The last time it was this bad was 1990. It was ok at 10.30 this morning but in an hour it came from nowhere. Both rivers burst and we are in the middle,” she said.

Kathleen O'Neill and her two dogs were brought by tractor out of her home on Manor Road.

“I knew we would be flooded that way the water was coming, we tried our best to keep it out, it doesn't work. All those years of work in my house for nothing,” she said.

Meanwhile, the controversial downgrade plan for the Midlands Regional Hospital, Portlaoise finally saw the light of day nearly a year after it was presented to the Minister for Health Simon Harris.

Crime also raised its ugly head in the midlands.

This time a gang vicously attacked a farmer in south Offaly. He was beaten and locked in his shed.

A gang was also involved in a chased trying to escape gardaí near Monasterevin.

It was reported that a gang was behind several incidents accross the country but had connections in Kildare and Laois.

Gardaí responded with the settin gup of a taskforce thate would operate accross Laois Offaly.