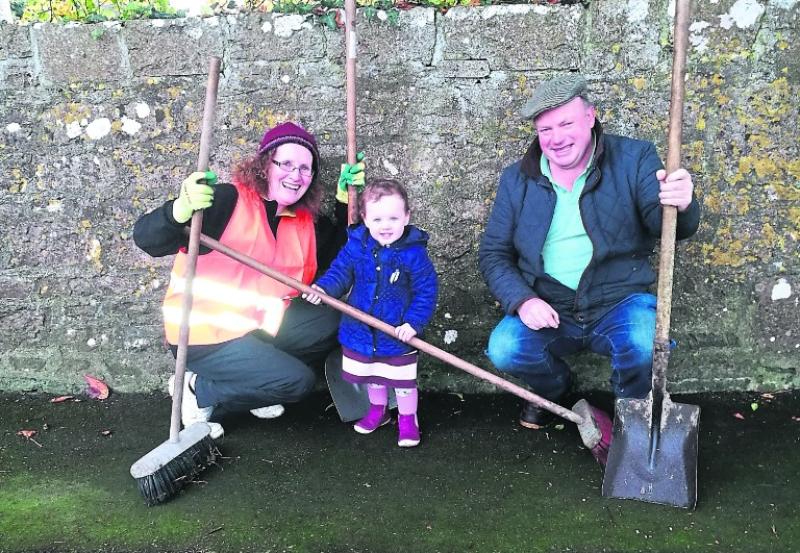 Eileen Preston, Rose Paisley, Elaine Dermody and Alison Rogers at the public meeting in the Midlands Park Hotel to protest the the proposal to downgrade Portlaoise Hospital. Pic: Denis Byrne

October 2017 sadly began with the death of Portlaoise town's first ever official Mayor Joe 'The Hesh' McCormack on October 2.

On Portlaoise Town Commission (later Town Council) for 21 years, he contested every local and general election from 1979 until the early 2000s.

Cllr Padraig Fleming extended his sympathies to the family at the time.

“I was very sorry to hear of his passing. He was a man of strong opinions, and he worked hard for the people. He was a charismatic guy, a great speaker who was aware of all the big issues. He added great humour to his speeches with his turn of phrase. He had plenty to say, a bright intelligent man and a good public representative,” Cllr Fleming said.

Hurricane Ophelia struck the county on October 16 and its wrath was felt with the closure of many businesses in Laois due to the 80km/h winds.

The damage caused to trees and debris was extensive and Laois County Council is still dealing with the aftermath of blocked rivers and broken trees.

Laois County Council and An Garda Síochána Crisis Management Team issued a warning early on Monday, October 16 asking businesses in Laois to close their doors and let their staff go home early before Hurricane Ophelia set in in Laois around 1pm.

Shortly after Ophelia. the shocking contents of a document was leaked to the Leinster Express which outlined a plan that could downgrade services at Portlaoise hospital, sending nearly 40,000 patients to Dublin or Offaly for care.

The Chief Executive of the Dublin Midlands Hospital Group called managers of hospitals to a meeting to “sign off” on the contents of a strategic plan for hospitals in the region.

Central to the implementation of its five year plan is the sacrificing of Portlaoise as a front line hospital.

The people of Laois reacted and by the end of October over 300 people gathered at Midlands Park Hotel for a public meeting on how the plan could be stopped in its tracks.

A new Portlaoise Hospital Action Committee was formed out of this meeting and it has worked tirelessly to bring the plan to a halt.

October also saw a huge number of break-ins and burglaries across the county including twenty farm gates worth up to €4,000 stolen from Ballyragget on Friday, October 6.

It was revealed in October that Laois County Council will buy the old County Hotel on Main Street, Portlaoise.