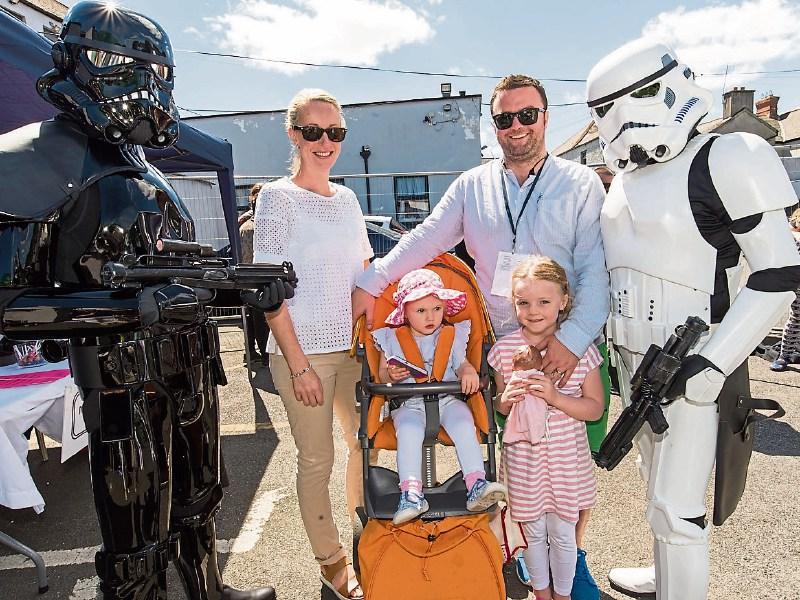 Fun at the Old Fort Festival in Portlaoise in June

The community of Portlaoise bid a sad farewell to the late Daryl Dargan (30) who died suddenly on holiday in Portugal.

Some €18,000 was donated to Daryl's family to that his remains could be brought home and laid to rest in Portlaoise.

The Old Fort Quarter Festival made a welcome return to the streets of Portlaoise for its second year and was a tremendous success, drawing thousands of people to the town. As well as the emphasis on heritage activities, this year's festival also saw a Street Stall Food Festival.

The Ballylinan area continued to be hit by a spate of burglaries. The latest incident saw a woman confronted by four masked and armed men at her home in an attempted break in.

Port man John Bolton got his epic cycle across te length of the Rocky Mountains underway with a target to raise €10,000 for Laois Hospice.

Charlie Flanagan was appointed Minister for Justice and Equality by the new Taoseach Leo Varadkar.

His first official outing in the role was at the Prison Service training centre in Portlaoise.

Minister Flanagan said that his emphasis would be on a crackdown on crime, particularly rural crime.

The new Minister also announced the awarding of Scott Medals to the survivors of the Garryhinch bomb ambush in 1976.

The Ratheniska, Timahoe, Spink Substation Group called for an independent enquiry into the sequence of events which saw the commencement of work by Eirgrid to faciliate a controversial €110 million electricity substation at Timahoe. Eirgrid accepted it did not have the right to proceed with the work.

Laois County Council outlined the case for Laois to be added to Rent Pressure Zones in a bid to tackle spiralling housing rents and the consequent housing crisis.

It noted that rents in Laois rose by double digits in the last nine quarters.

Laois Councillors also voted narrowly to include a red zone map for turbine development in the new six year County Development Plan, effectively amounitng on a ban on wind energy in the county.

Council CEO, John Mulholland had proposed limited areas in the county for turbines. He warned that it was against Government policy and advocated some zoning.

Councillors voted 9 to 8 to reject his proposal.