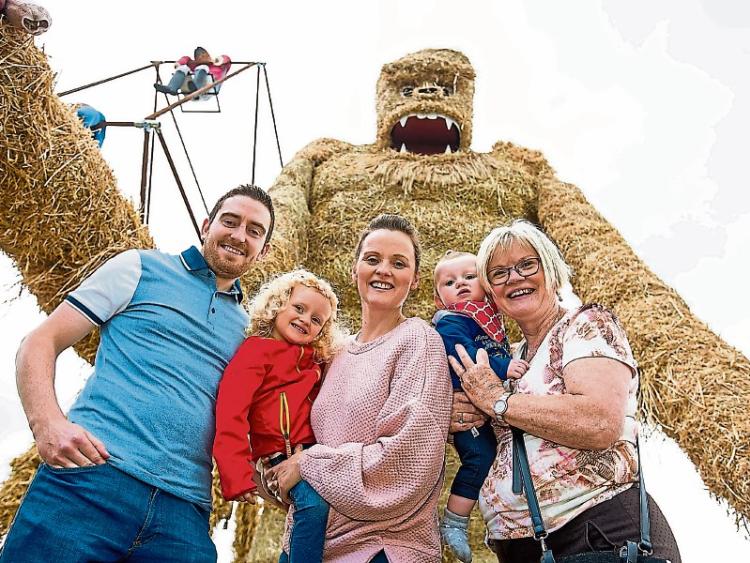 Happy visitors to the Durrow Scarecrow Festival in 2017

August saw news that the number of people on the waiting list for a council home in Laois had jumped to almost 1,500 during 2017, despite efforts by Laois County Council to stem the crisis.

The Slieve Bloom Mountain Bike Trail was back on track with the approval of €1 million by the Government for the project. Minister Charlie Flanagan said the money would allow for t he commencent of the Trail.

Minister Eoghan Murphy vetoed a proposal in the County Development Plan which would effectively ban wind farms in the county, rejecting the proposal which was led by local Fine Gael councillors.

Kiln Lane in Mountrath and Rathdowney and Errill showcased their local areas to great effect when the judging took place in the Pride of Place competiton.

Tourists flocked to the Scarecrow Festival in Durrow.

Laois Rose Maeve Dunne represented the county at the Rose of Tralee festival. Unfortunately, Maeve was not selected for the final 32.

The Leaving Cert results brought the usual mixed emotions, but with many students and schools pleased with the overall results.

The end of August saw the arrival of 55,000 Electric Picnic fans to Stradbally Hall, for the annual end of summer gig.

The Holy Family Schools in Portlaoise, Scoil Bhride National School in Knocmkay prepared for the new school year and a new era education in the town. A fourth secondary school, Dunamase College also opened in Portlaoise.

Unfortunately, crime raised its head also in August with a man hospitalised following a botched robbery from a filling station in Mountrath. Gardai arrested the man at the site of a crash in Abbeyleix. The car he was travelling in had been hijacked.

It emerged that Laois County Council had taken ina quarter of a million in total in parking fees and fines in the first six months of the year.

August also recorded a bad week on the county's roads, with a 22-year old man dying in a road crash in Portarlington and ayoung Abbeyleix man lost his life following a car crash in Tipperary.