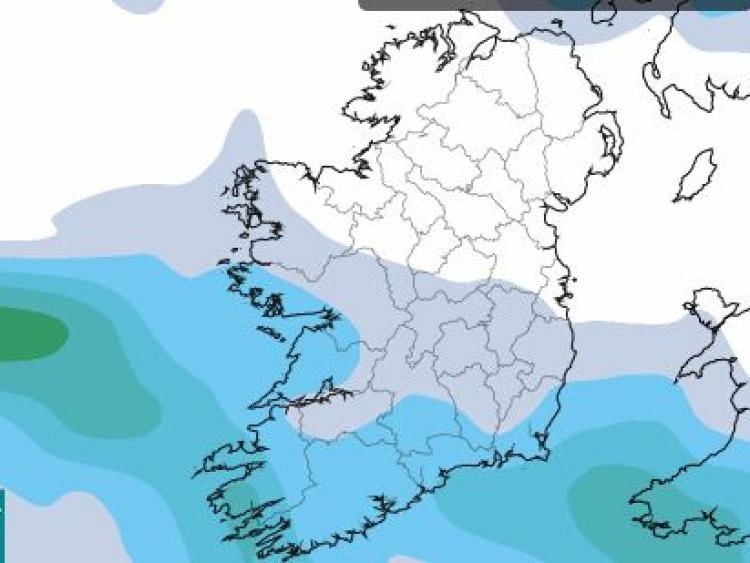 After a stormy start to the week, Met Eireann is forecasting a change to much colder weather later in the week and into the weekend it will get bitterly cold with a chance of wintry showers over the weekend with widespread severe frosts and the risk of icy stretches on roads.

Very windy in many places on Thursday morning with gale force westerly winds veering northwest and some severe gusts near west and south coasts with a continuing danger of coastal flooding.

Expect occasional heavy showers today in Laois but a lot of dry and bright weather as well. Afternoon temperatures of 5 to 9 degrees.

Cold tonight with scattered showers, rain developing in the south and southwest with a risk of snow on hills. Lowest temperatures of -1 to +2 degrees with frost and ice on untreated surfaces. Light to moderate westerly winds.

Bright on Friday with sunny spells and showers. In the west and north of the country the showers may merge to longer spells of rain. Winds will be mostly light or moderate but they will be strong and gusty at times on west and southwest coasts. Highest temperatures of 4 to 7 degrees.

Lighter winds but much colder and drier weather over the weekend with widespread severe frosts and the risk of icy stretches.

Cold and frosty Friday night with icy patches. Many places will be dry but there will be some showers near northern and eastern coasts as winds become northeasterly, some showers may be wintry on higher ground. Lows of +1 to -2 degrees Celsius.

Saturday: A very cold bright day with a fresh northeasterly wind in the morning making it feel very raw.

There will be some sunny spells but some wintry showers at times mainly in coastal counties of the south and east.

Afternoon highs of 4 to 7 degrees Celsius and winds will fall off light easterly in the evening.

Cold, frosty and icy on Saturday night with temperatures in most places ranging 0 to -3 or -4 degrees Celsius and the risk of some freezing fog in northern parts but +2 or 3 along exposed east and south coasts.

Sunday: Very cold, bright and mainly dry day with good sunshine and light winds, just the risk of the odd shower along east and south coasts.

Afternoon highs of just 3 to 6 degrees Celsius. Cold and very frosty on again on Sunday night away from the east and part of the south coasts with sub-zero temperatures.

Monday: Cold bright and mostly dry on Monday but cloud thickening and southeasterly winds freshening, some frost on Monday night.

Tuesday: indications suggest it will be a breezy day with rain moving in from the south and west.

Very windy in many parts today but mainly dry and bright. Less windy in the north with rain and sleet there. Highest temperatures of 5 to 9 degrees pic.twitter.com/yG8iZx7BD1

Laois comic Bernard O'Shea gets his Dancing with the Stars outfit #watch.