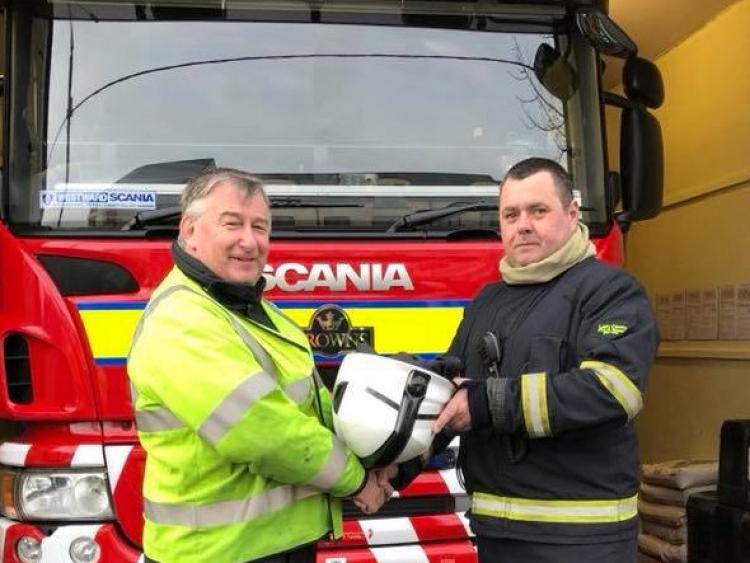 Stradbally man, Liam Kelly, has retired from Laois Fire and Rescue Service after almost 30 years serving his community and county.

Due to retire in June of this year, Liam decided to leave the service six months early to “start 2018 afresh”.

Liam has worked as station officer in Stradbally for the last six years and on December 30 he handed his pager to Darren Moran who has taken over this role.

After handing over the pager and the huge responsibility attached to it, Liam has had his first week off duty in almost three decades.

“It is my first week without it, I thought last night that it was nice to sit by the fire when the storm was raging knowing that no matter what happens your pager wasn’t going to be going off, I could stay in and that was it,” he said.

Liam has also worked as a Community Employment Supervisor for 27 years and he is looking forward to the freedom of enjoying his weekends off.

“Some people would say it is nice to get your life back but what I am looking forward to is not being on call 24/7. In the fire service there is a degree flexibility but you have to move around within the spaces.

“It is nice to be able to get into your car on a Friday evening when I finish my job and once you are finished you can do what you like on Saturday and Sunday. In the fire service you were still on call Saturday and Sunday unless you made arrangements to be off but now I can finish up and that's it,” he said.

“The fire service is after coming on in leaps and bounds since then in 1988 in terms of our appliances in Stradbally and our equipment.

Looking back on his years of experience, he said there were standout moments but they were often difficult.

“It is very hard to put into words as regards what would be a standout moment.

"There are standout moments in a sense but there are things there that we are after being responsible for the last few years which I suppose we don’t have the right words for. We had suicides in the area, road traffic accidents it's very hard to put into words,” he said.

According to Liam, any new members joining the fire service must understand the seriousness of the role.

“What people expected from the service now it is a full time service on a part time basis.

“There is lots of changes from the aspect of health and safety is a big thing. Sometimes, fire officers are expected to do things that they cannot do, when we arrive people think we are fireproof and we are not particularly.

“It is not about the financial at the end of the day. Anyone who goes into the fire service for money you won’t get. You are in it for the love of it, it is a big commitment.

“There is no ideal person some people think it suits a single person rather than a married person other people would say. They have to be dedicated and see it as a vocation and a career that they really want to be into,” Liam spoke passionately about the job.

His passion for the role is evident and Liam managed to pass it on to his son Philip who is a member of Portlaoise Fire Service.

One of the most enjoyable parts of the job for Liam was the community aspect, he enjoyed the days of bringing the fire engine to St Colman's National School, Stradbally where his daughter, Sharon Carroll, is Vice Principal.

“I would like to thank Laois and Offaly County Councils who are our employers at the end of the day.

“Thanks to the crew in Stradbally and congratulations to Darren Moran who is taking over as station officer, best of luck in the future and keep safe.

“Thanks to my partner Betty Redmond for putting up with me for the last number of years,” he said.

Best of luck to Liam on his retirement and congratulations on completing so many years of service.

Portlaoise water mains pipe under repair was leaking millions of litres a month.