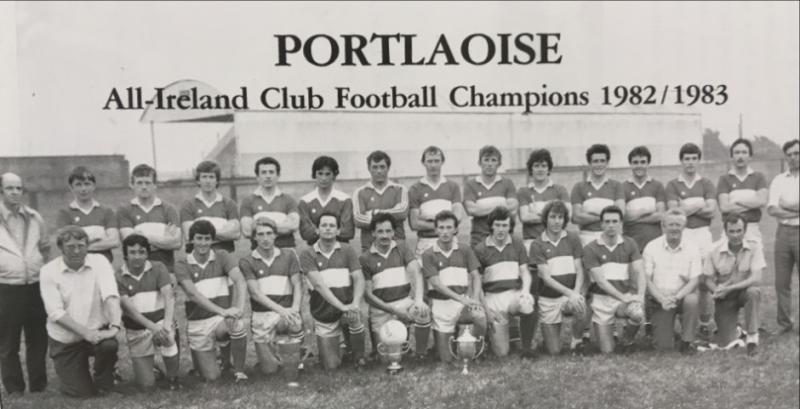 The Portlaoise team from 1983.

Portlaoise have long been the most successful club in the county, but they remain the only Laois team to win a senior All-Ireland football title.

They achieved that in the rather unusual venue of Cloughjordan, Co Tipperary back in 1983. It was there that they beat Roscommon side Clann na nGael, after the game had to be moved from Tullamore due to a flooded pitch.

Portlaoise had defeated Annanough in the Laois final of 1982, thus qualifying them for their run at provincial glory. They progressed through Leinster and beat Ballymun Kickhams in the final, 1-8 to 0-7.

From there, they met a strong St Finbarr's team from Cork in the All-Ireland semi-final, a side which boasted Jimmy Barry Murphy among their ranks at the time. The game was played in Portarlington, and Gerry Browne kicked the winner late on.

After battling to get to the final, the decider turned out to be a more pedestrian affair, as they accounted for Clann na nGael on a scoreline of 0-12 to 2-0, with one of the Clann na nGael goals coming from a penalty.

The Portlaoise team would provide some of the key players to the Laois team of 1986, which won the NFL title (which also features on this list), namely Gerry and Colm Browne, Eamon Whelan and Tom Prendergast.

Portlaoise would go on to add Leinster titles to their trophy cabinet in 1985 and 1987, but another All-Ireland title eluded them, as it did for Clann na nGael, who would go on to lose four finals in a row between 1987 and 1990.

Portlaoise, however, did get to savour that winning feeling, and it stands out as memorable moment in Laois history.