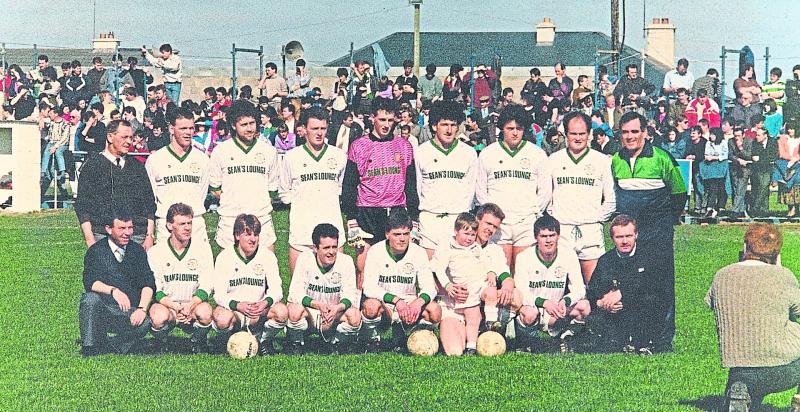 The Portlaoise AFC team prior to their game with Home Farm.

Picture the scene, if you will. Rossleighan Park is kitted out with scaffolding, a crowd of about 3,000 people have packed into the ground, and the plucky local side are expected to see their interest in the FAI Cup come to an abrupt end in front of the biggest crowd they are likely to ever play in front of.

Normally, that's exactly what happens. But on March 10th, 1991, Portlaoise AFC ripped up the script, and in doing so, put the seal on one of the most famous days in the history of the club.

The background to Portlaoise's involvementin the 1991 FAI Cup came about because of their rapid rise up the ranks in the leagues, which resulted in their participation in the FAI Intermediate Cup.

Clubs which qualified for Round 5 of the Intermediate Cup earned their place in the FAI Senior Cup, and Portlaoise duly progressed far enough, and were drawn to play Home Farm, in Rossleighan Park, with Home Farm managed by former Irish international Ray Treacy.

As for the game itself, Portlaoise made the breakthrough in the 20th minute when Kevin Conroy powered home a header when John Comerford's free kick rebounded off the post. Comerford was not to be denied, as he rifled home Portlaoise's second goal fifteen minutes later, as the vociferous home crowd sensed a famous upset.

It was left to captain Aengus Burke to cap off the win, as he tapped home the third goal to leave Home Farm needing a miracle, and there was to be no divine intervention for the visitors. They did manage a late consolation, but there was to be no denying Portlaoise their historic win.