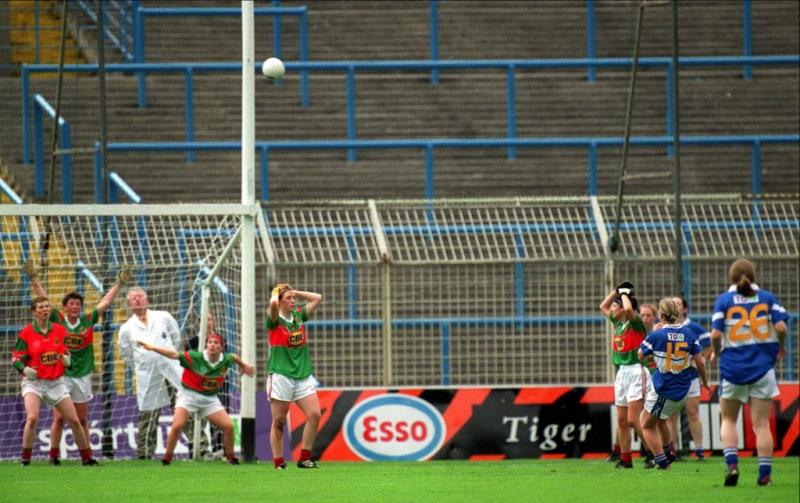 Mark Kirwan kicks the game winning score against Mayo in the 2001 All-Ireland final.

In terms of handling pressure, few Laois sports people have ever done as well as Mary Kirwan did back in 2001.

With her side level against the reigning All-Ireland champions Mayo, and time almost up, Kirwan waited until seconds before the hooter went before kicking over a close-range free, and so securing a first ever All- Ireland title for the county.

While this victory will be remembered for the sheer drama of the final, and the manner in which it was won, it also went a long way to tempering past disappointments for Laois.

Having lost all seven of their previous All-Ireland final appearances, the county was desperate to finally make it over the line.

The final scoreline, 2-14 to 1-16, gives an indication of the quality of the game, while at the time, it also set a record for largest attendance at a Ladies Football All-Ireland final, with 21,387 patrons there to witness the Laois victory.

Laois had to earn the win the hard way as well, as they trailed 1-10 to 1-8 at half time, despite Kathleen O'Reilly's early goal.

Mayo were spearheaded by Cora Staunton, now plying her trade in Australia, and the game swung back and forth in the second half, with Mary Kirwan's penalty keeping Laois right in the mix. Staunton hit two frees to level the scores with time almost up, but the last act on a thrilling and historic day came from Mary Kirwan's right boot.