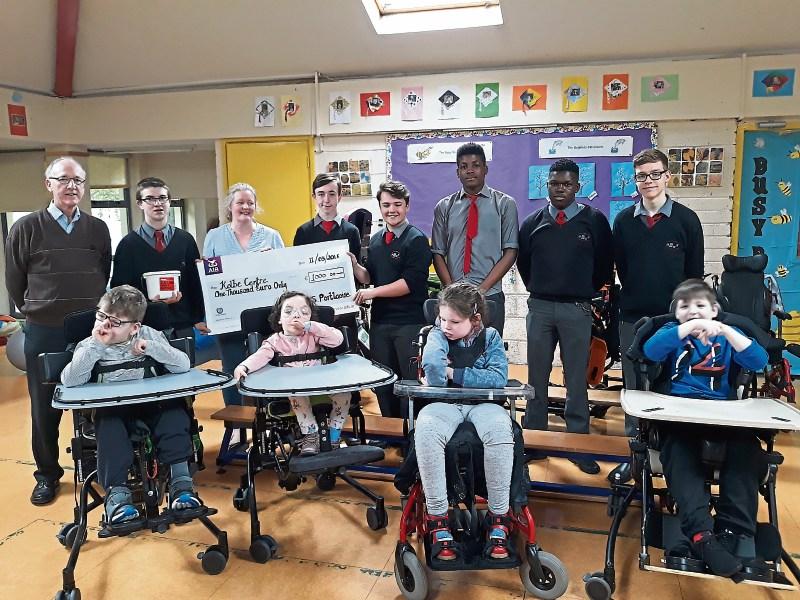 The band played two hours of rock classics, with all the students invited to pay a small entrance fee to enjoy it.

Among the favourites was 'Highway to Hell' when First year student Dividas danced 'the floss', to cheers from all the students and teachers.

Added with a recent church gate collection they held with Kolbe parents, the students have managed to raise €1,000 for Kolbe school.

Transmitter also made their own donation to Dunamaise Arts Centre, as part of proceeds from the gig.

The money will be put to good use.

“We are fundraising for a Sensory Trolley. This trolley will have a bubble tube, projector, sound system and other sensory equipment which can be used in any classroom.

“This trolley is a mobile sensory resource and will be used in conjunction with our sensory room to ensure that all the sensory needs of our pupils are met,” Ms Mahon said.

St Mary's CBS also supported a church gate collection and a bag pack for the special school, as part of forging links to create social awareness for CBS students.

“It was a pleasure to work with the students from the CBS for our church gate collection and we look forward to working with them again next year,” the Kolbe principal said.

Brian Thompson is a Deputy Principal at the CBS who with DP Sarah Mulligan and Transmitter, organised the fundraiser.

“It was a fantastic gig, students were dancing on stage and teachers were dancing too. It was a welcome respite from the stress of exam times,” he said.

They were delighted to bring students to Kolbe to present the cheque.

“We hope to develop further links with Kolbe Special School in the years to come,” he said.

He thanked Transmitter, and also Brother Matthew, former principal of the Patrician Brothers Ballyfin, and the chairperson of Kolbe, for his help to facilitate the co-operation between the schools.