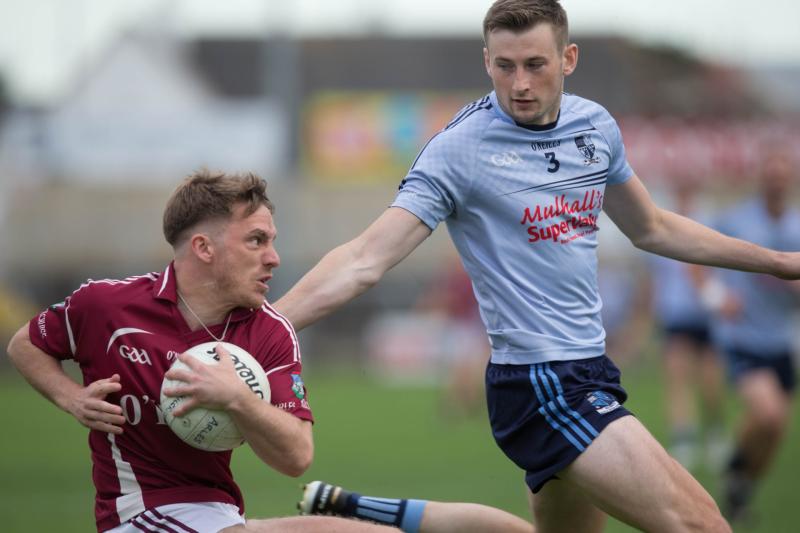 Ross Munnelly, Arles-Kilcruise, on the attack against Gavin Tynan, Ballyroan Abbey in the Division 1B final. Pic: Alf Harvey.

On that occasion, Ballyroan Abbey came out on top in what was, for the most part, an evenly contested game.

Ballyroan Abbey were brilliant for about 40 minutes against The Heath, but the manner in which they almost threw that game away should guard against complacency. Arles-Kilcruise, meanwhile, will have Kevin Meaney back in the fold, after he missed the league final.

He has been bringing his influence to bear already since his return, scoring a crucial goal against Stradbally and, when he's on form, he is an extremely difficult player to keep under wraps.

Arles-Kilcruise appear to have improved since the league final, and with their experience and ability they can be formidable. They are lacking pace, but have enough players who can think quickly, which is arguably a more desirable trait.

However, we shouldn't write off Ballyroan Abbey, who are going well at the moment. They were unlucky not to get a result against Portarlington, and played some impressive football against The Heath.

While the late lapse is cause for concern, they do have a lot of strength, particulalry in attack. Any forward line with Diarmuid Whelan, Scott Conroy, Padraig McMahon and MJ Tierney will give themselves a chance in most games, and we can see them getting over the line on Wednesday night.