Year in Review: Snowmageddon as Beast from the East gripped the country in March 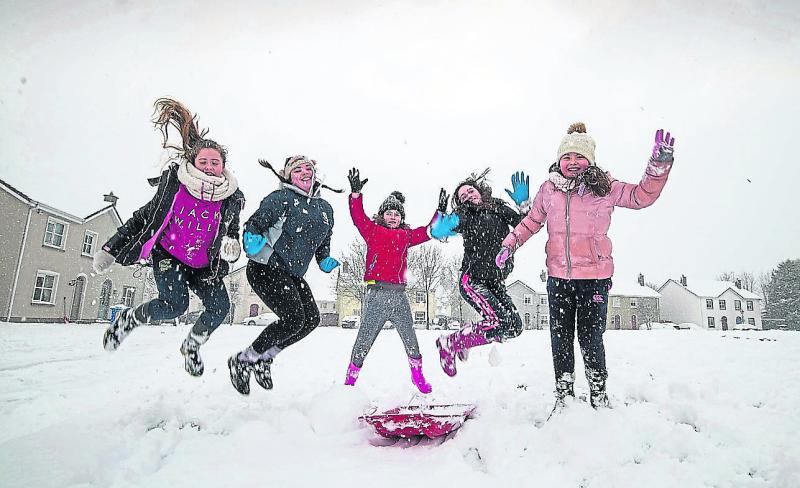 Snowtastic: Young people jump for joy at Ashgrove Mountmellick on Thursday during the Beast from the East/Storm Emma Picture: Denis Byrne

March 2018 will remain in the minds of many people for generations to come. Can you remember why?

The so-called ‘Beast from the East’ storm gripped the nation for almost a week. Laois was shut down from Thursday, March 1 well into the next week.

The once in a generation event was embraced by hundreds of people who got out and enjoyed the days off school and work as well as the unforgettable bread and milk shortage. Hundreds of pictures were sent into the Leinster Express by readers which featured heavily in our online and newspaper reports of these extraordinary days.

Once the county thawed out a bit there was plenty of big stories in the weeks that followed. Laois gardaí recovered up to €250,000 worth of jewellery on the basis that the county was being used as a base for a gang that roved internationally.

Three men understood to be from Romania were arrested in Ballaghmore and detained in Portlaoise, Tullamore and Athlone.

They were interviewed in connection with an investigation into the theft of €250,000 worth of jewellery from a shop in Athlone during the storm the previous week. They were brought before Portlaoise District Court and remanded in custody to appear before Cloverhill District Court for DPP directions.

The Rathdowney pantomime Group also held its 32nd annual show ‘Rock to Save the World’ around the same time and a picture of Dr Kennedy (Donal Ryan) being interviewed for the ‘Leinster Express World News’ by Thelma (Lisa Doran) featured on our front page that week.

In the St Patrick’s Day special there were pictures captured at parades all around the county with Spink’s Donald Trump and Kim Jong-Un float featuring on the front page.

It was also revealed that week that hard earned taxes were spent removing truckloads of illegally dumped rubbish from litter black spots around the county. With less than three months of 2018 gone at that stage, the council was forced to remove a huge 35 tonnes of waste from 20 illegal dumping black spots.

There were 69 complaints about litter and 16 fines issued.

This was also the month that plans for Supermac’s supremo Pat McDonagh’s petrol station at Togher were revealed.

This is still ongoing after the planning was recently appealed and has been left with An Bord Pleanala.
Electric Picnic 2018 sold out in March after the lineup was revealed and the last tickets were snapped up.