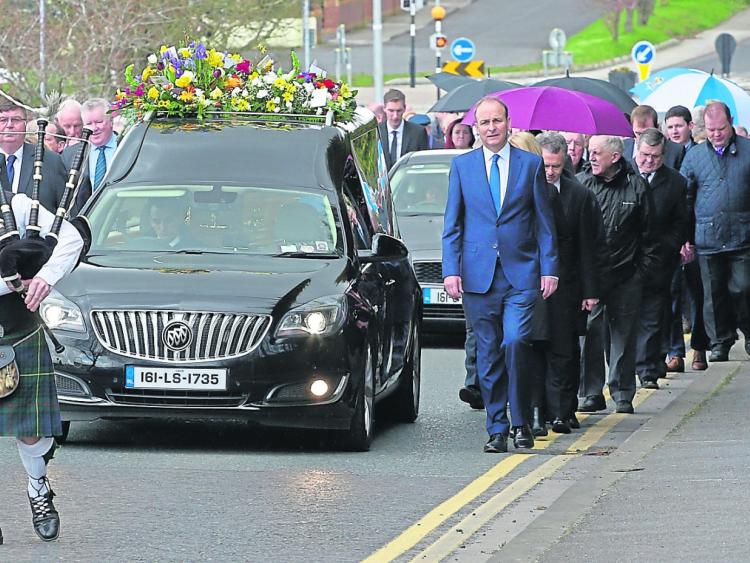 There was a mixed bag of events and news stories throughout April in Laois.

‘A loyal and faithful friend to Portlaoise’ Cllr Jerry Lodge was laid to his eternal rest in April 2018. A host of national and local politicians from across the political spectrum attended the Requiem Mass in St Peter and Paul’s Church including Fianna Fail leader Micheál Martin. The chief celebrant Fr Paddy Byrne was joined by Fr David Vard, Fr Tom O’Reilly, Parish Priest of

Clonaslee, and a cousin of Jerry’s wife Patricia, Fr Tom. Tributes flooded in for the late Cllr Lodge, who was well-respected and died in office after 51 years as a public representative.

In Portarlington, there were calls for urgent council help to work on a landscape improvement plan for the town. Cllr Aidan Mullins praised the Tidy Towns in Portarlington for its comprehensive action plan needed to bring the town on in the next few years.

Chief Executive of Laois County Council John Mulholland condemned the burning down of a council house in O’Moore place Portlaoise. A row of five houses was vacated and Mary Dwane, the mother of Cllr Caroline Dwane-Stanley, was unable to return to her house after the fire.

Leinster Express all about his experience. He encouraged everyone in Laois to talk to their families about becoming organ donors.

Excellence to the tune of €45,000. This was also the month when the disappointing news was shared that Laois was not included in Failte Ireland’s new tourism plan called Ireland’s Hidden Heartlands.

Stories about community CCTV schemes hanging in limbo were also reported throughout April as communities such as Mountmellick frantically fundraised for the crime-prevention system while Woodenbridge community could not get their system finalised after two years of planning and funding. This story is still ongoing as the dispute over the responsibility of data controller still hangs in the balance.

Laois County Councillors expenses were revealed in April with figures showing that €8,000 in expenses ran up attending a conference on housing. A huge €522,606 in pay expenses was spread out among the 19 sitting councillors in 2017.

Meanwhile, Portlaoise Parish hired a tech security company to protect the old St Paul’s school site building on the Borris Road which was waiting to be demolished. The vacant building was wrecked by vandals and the parish reluctantly hired a security firm for a time before the demolition.

Portlaoise sports star Zach Tuohy played the 150th game of his AFL career in April 2018. He reached the career milestone with Geelong Cats in Australia.