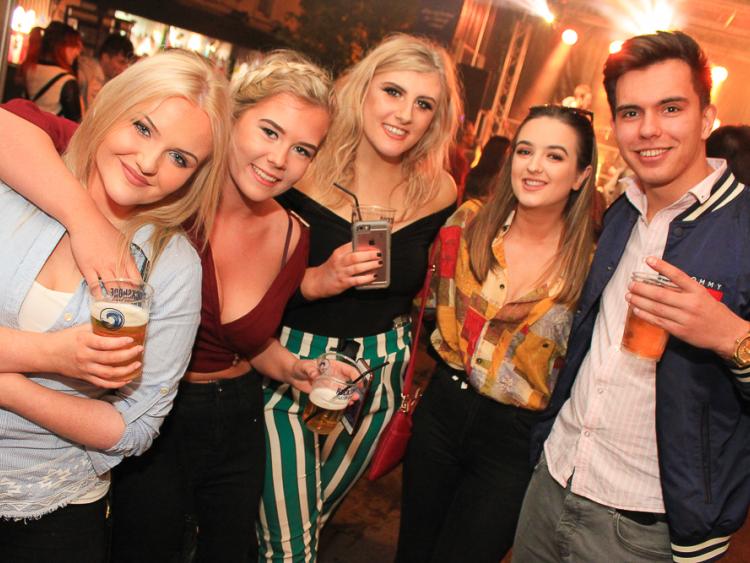 Big night out at the Old Fort Festival in Portlaoise. Picture: Tom Cullen

The summer of 2017 will go down in the history books for soaring temperatures right around Ireland.

Laois was no different with the county suffering a drought that led to fires, water shortages and a massive sale in fans.

Temperatures began to soar above 30 degrees for days by the end of June.

Fire warnings issued materialised in flames during the hot spell in the Slieve Blooms but Fire and Rescue teams were able to contain the blaze.

The weather made for a super Old Fort Festival in Portlaoise where thousands gathered for a fantastic weekend celebrating the heritage of the town.

Daytime family events were followed by a fiesta of nighttime fun on Main Street under a canopy which protected many from the sun!

“What a weekend, it was phenomenal and the turnout was incredible,” Ivor O'Loughlin, Festival Chairperson told the Leinster Express which supported the event again this year as media partner.

The atmosphere on the Festival Sunday was added to by the Leinster Senior Football Final in Croke Park which saw Laois challenge All-Ireland Senior Football Champs Dublin.

June was historic for Martin Keane. The Errill resident was announced as the Chairman of the board of Glanbia PLC. A dairy farmer, Mr Keane has risen to the top of the international food giant which employs 6,600 people in 32 countries.

“I am very pleased to be appointed to serve as group chairman. I will continue to build on the work of all those who have had the vision to make Glanbia the global nutrition group it is today,” he said.

Another landmark event which marked a new chapter in the history of Laois was the official opening of the Holy Family school campus in Portlaoise.

Bishop of Kildare and Leighlin Denis Nulty was on hand to cut the ribbon on the senior an junior schools after a campaign that ran for many years to house the Portlaoise Parish managed schools.

“Our pupils have 25 nationalities, 28 languages and 20 per cent of them were born outside Ireland. We are some family aren't we,” he said.

Portlaoise was the scene of violent late-night incidents which saw a woman hospitalised with extensive injuries to her face. Houses and a caravan were also attacked in the row in the Knockmay area of town which flared up around 4 am.
Meanwhile, June marked the passing of one of the best-known business people in Laois. Sadness prevailed after Pat Miller from Timahoe was laid to rest at the age 70.
The businessman, who lived in Meelick, Portlaoise, was best known as the owner of Millers Hardware in Portlaoise.