Year in Review July: Laois gets big investment and jobs announcement in July 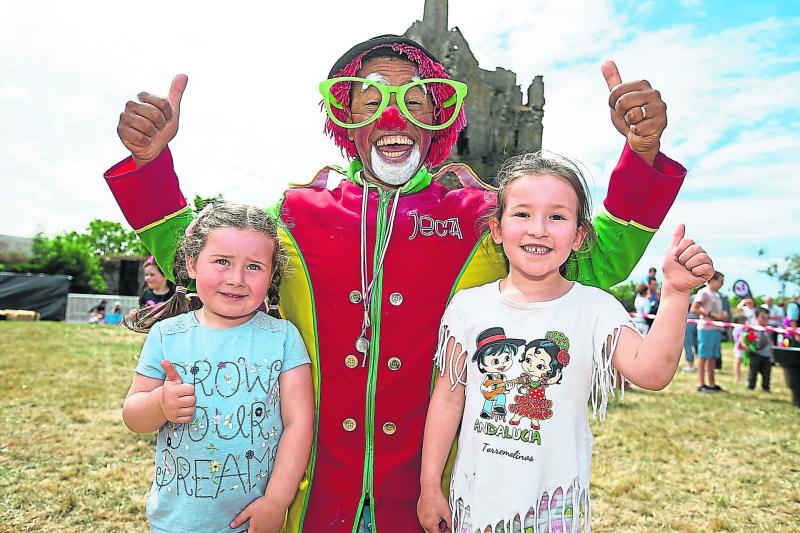 Aoife and Roisin McHugh with Jeca The Clown at The Folly in Cullohill. PIcture: Alf Harvey.

July saw the announcement of one of the largest investments in Laois in decades with the news that Glanbia Cheese and US food company Leprino Foods would invest €130 million in a new Portlaoise plant, expected to open in 2020.

It was stated that the investment was set to bring over 100 full-time jobs to the county, as well as 250 jobs in construction.
The Chairperson of the Glanbia Group, Martin Keane from Errill, predicted that it would bring further jobs and greatly benefit the local economy.

The heatwave was in full flow in July with water levels running critically low. The Portlaoise water supply and the Derryguile water treatment plan in Mountmellick were under particular pressure, according to Irish Water.

Nighttime restrictions were in place on the Mountmellick road area of Portlaoise and Irish Water said a hosepipe ban was also very likely.

A Garda investigation was also underway into a heatwave fire in the Slieve Blooms whichstarted on July 4. The fire damaged hundreds of acres of land and caused the fire service to work around the clock for a week.

Portlaoise, Rathdowney, Mountmellick, Mountrath and Abbeyleix fire services worked in rotation to battle the wild fire in the Slieve Blooms.

The fire was contained after five days but flared up again due to the wind and high temperatures.

The way has been cleared for a possible housing boom in Portlaoise, with work also set to begin on the final link of the Southern Circular Road Extension.

An extra 18-hectares of land was rezoned for new developments following the Chief Executive of Laois County Council’s report on the Draft Portlaoise Local Area Plan.

This brought the total number of residential units that could be built in Portlaoise to 2,100 in the next five to six years.
Local woman Breda Deegan and well known Irish influencer, James Kavanagh and his partner, William Murray were crowned the first ever Irish Porridge Making Champions at the inaugural ‘PaddyO’s Irish Porridge Making Championships.'

There is no space at other hospitals to cope with the removal of maternity services at Portlaoise hospital, according to the doctor who has overseen the overhaul of the unit.

Speaking to the Leinster Express was Consultant Obstetrician and Gynaecologist Dr Michael O'Connell who is Clinical Director for Integration for the Coombe Hospital and the Midland Regional Hospital Portlaoise.

“We've got to provide a safe service,” he told the Leinster Express. “Whatever somebody in office (political) decides, that service can't just stop tomorrow.

“There is no capacity anywhere else at the moment,” he said.