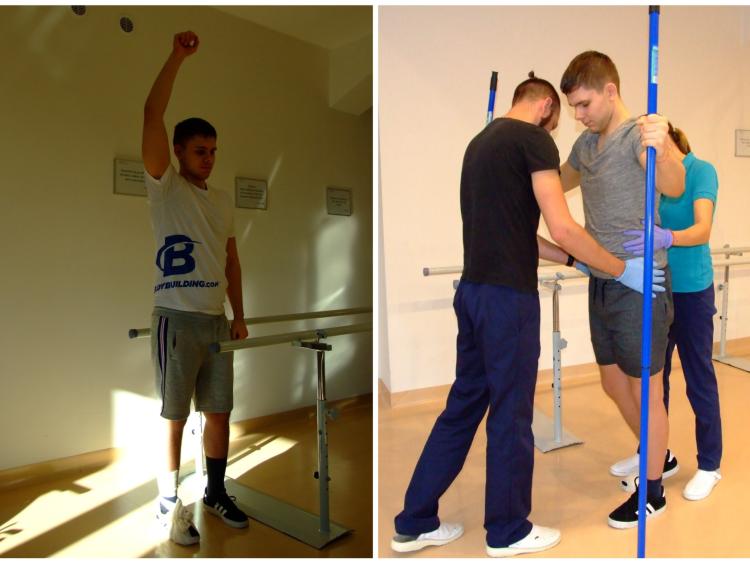 Daniel Wolski (20) suffered spinal injuries and needed rehabilitation to learn how to walk again and build his strength back up after he accidentally fell three metres off a wall.

After serious spinal surgery and a month in intensive care, Daniel was flown home to Ireland to recover.

However, the waiting list for rehabilitation was too long and he was forced to go to his native Poland to start his recovery sooner.

Every day mattered for Daniel’s recovery and he was facing months of waiting in Ireland.

His girlfriend Sara Łukaszewska has been by Daniel’s side since the day of the fall. She told the Leinster Express that the lack of support from the Irish health system was ‘mentally draining’ when they were waiting over two months for a place in a rehabilitation centre.

“Unfortunately, we feel like we did not receive much support from the hospital in Dublin and Irish health services in general.

“The waiting time for a place in a rehabilitation centre in Ireland was extremely long.

“As you can imagine, being in Daniel’s position while not receiving much support was mentally draining.

“We have decided we want to do everything for Daniel in order to make him feel better emotionally and help him with his recovery.

“He started his rehabilitation in November and made impressive progress so far.

“He is back home [in Portlaoise] for Christmas and he is going back to Poland soon to continue his rehabilitation,” she said.

Daniel had plans to do a fitness instructor course last September before the accident put a stop to those plans. His determination and passion for physical activity are contributing to the strides in his recovery.

“The physiotherapists in Poland said he is extremely determined and are very impressed with his progress so far. However, we are aware that he still has a long journey ahead.

“The main goal of the physiotherapists is to help him gain movement in his legs, help build the muscles back, learn to walk again and become as independent as possible,” she said.

An online fundraiser gathered over €21,000 for Daniel and a number of local fundraisers also received great support. Sara thanked anyone who helped or donated in any way.

“The money raised was used to cover the costs of medical transportation for Daniel. We are extremely grateful to everyone who donated and helped us in this extremely difficult time,” she said.

Daniel is learning to walk again with the help of the treatment he is receiving in Poland.

Both Daniel and his girlfriend Sara worked in The Killeshin Hotel in Portlaoise at the time of the accident.

They are originally from Poland but have lived in Portlaoise since 2006. Daniel is a past pupil of St Mary's CBS in Portlaoise and he played for Portlaoise Panthers basketball club.