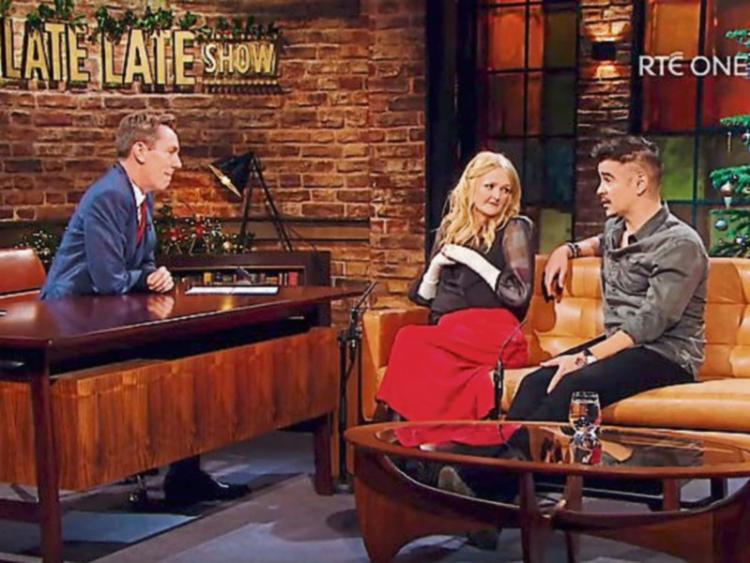 Laois woman Emma Fogarty who spoke on the Late Late Show on December 21 about her painful skin condition, has thanked everyone who rallied in support and helped her reach her fundraising target for the Debra Ireland charity.

Together with actor Colin Farrell she told Ryan Tubridy about her condition and the charity Debra Ireland, for whom Emma is the Patient Ambassador.

Emma had described how she would be in tears that night by the time she got home to Ballyroan, with the pain of travelling to Dublin and doing the interview.

“I put a smile on but inside I’m crying,” she had said.

Emma confirmed to the Leinster Express how the day took its toll.

“It was a very difficult journey home. I had to take lots of medication just to get me home, I did sleep for a little while but it was the following days that I struggled the most. I told Ryan that I probably wouldn’t get up until Christmas Day and every word of it was the truth. The next day was really hard. I slept a lot but the pain I endured was inexplicable. I cried a lot. I’m still trying to recharge my batteries. But being on The Late Late Show was so worth it,” she said.

Her mother Patricia and her sister Catherine were in the audience watching in support.

“It was an amazing opportunity to get EB and Debra Ireland highlighted. Emma did an extraordinary job and her whole family are very proud of her,” Patricia said.

Emma and Colin had asked the public to make a €4 text donation to help raise €60,000 to pay for carers to change the bandages for sufferers. Bandage changes cause patients hours of excruciating pain. They hope that parents can be spared the task and instead be the ones to hold their child’s hand and comfort them.

The reaction to their request was great Emma said.

“The public reaction has been unbelievable. We’ve had so many positive comments and for the first time we were the talk on social media. It was very special to see and be a part of,” she said.

“We’ve done very well and the public were very generous. Thank you to everyone who donated,” Emma said.

Debra Ireland have confirmed that over €60,000 was raised.

“We did indeed go over the €60,000 and there was a big jump in donations on the back of the Late late Show,” the charity told the Leinster Express.