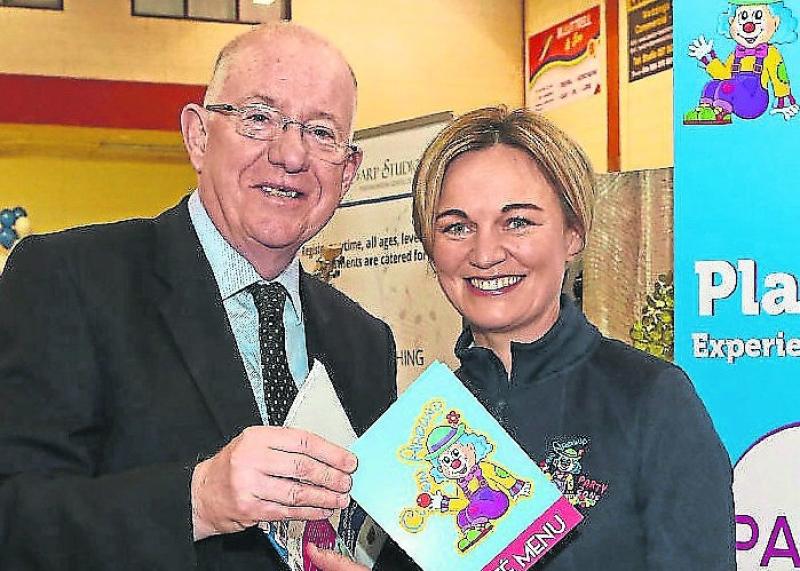 Businesswoman Elaine Mullally of Clown Around, Portarlington pictured with Laois TD and Minister Charlie Flanagan at an enterprise event

The owner of a play centre in Laois is facing “many sleepless nights” after her business insurance costs doubled for 2019, despite having no claims in ten years.

Elaine Mullally opened Clown Around play centre in Portarlington in 2008. The successful business has had no claims in ten years but is facing a huge hike in its non-negotiable insurance cost.

Elaine told the Leinster Express that after cutting so many corners to cover the cost last year, she has been left with few options to keep her business open.

“Last year we sat down with our staff and had a serious look at what we could do. We decided to close on Mondays and Tuesdays during the school term to lower our costs.

“It was a tough year, we were closed for a week during the snow and with the fantastic summer weather the footfall wasn’t what it was in other years. There was the sugar tax and VAT increases, we endured all of this and now the insurance premium has gone from €7,000 to €14,500.

“We have no more cuts to make, we are closed for two days of the week, we are not touching our staff’s pay, they work hard for their money. Our only option is to increase our prices and we haven’t done that since we opened. There are sleepless nights ahead and it has not been an easy 12 months,” she said.

It is understood that a number of play centres in Ireland have closed because they cannot get an insurance quote if they had any previous claims.

Elaine said she has never had a claim on her insurance and that is why they were able to secure the €14,000 premium.

“It is because of the claims culture in Ireland, years ago if kids got scratched or hurt they were picked up and got on with it, now the parent turns around and asks who can I claim off for this? Ireland has become a dirty word in relation to claims culture and this is only the start.

“If a child breaks its arm and the medical bills are covered why is there a need to go after the company for €15,000? Just because a child has an accident doesn’t mean you have to go after the business.

“We spent a lot on maintenance and I don’t begrudge that, we had external inspectors who have pointed out very minor, low-risk adjustments which we have carried out and invested heavily to make those changes and we are told if we don’t do those improvements we won’t get insurance,” she said.

Despite carrying out the minor improvement works, the premium still more than doubled this year.
Elaine is a member of the Alliance for Insurance Reform group which is a national lobby group calling for changes in insurance for all businesses.

One of the directors of this group is Linda Murray who owns a play centre in Co Meath.

It has been reported that Ms Murray is calling on the Government to fast-track solutions to the insurance crisis, including a new investigative forum, before its too late for the leisure industry here.

WATCH: Nurses on the picket line in Laois at Portlaoise hospital.