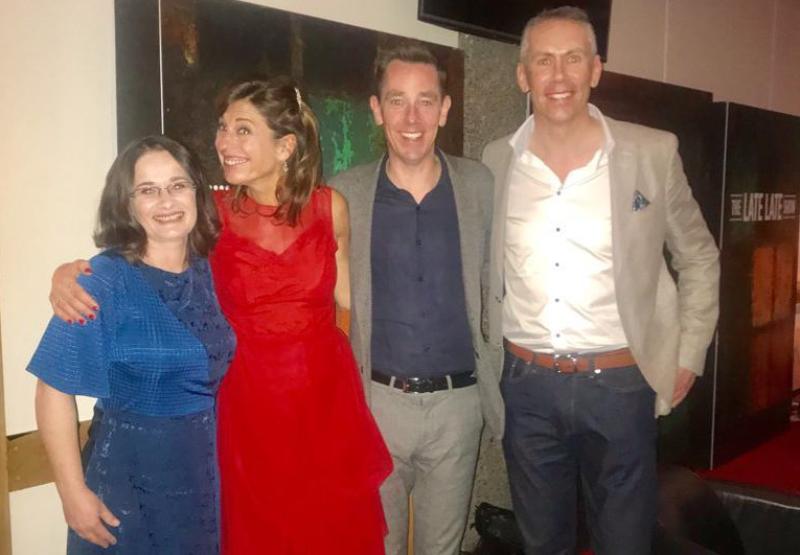 A Laois woman who turned her grief at the loss of her husband into a support system for widows and widowers in Ireland spoke to the nation on the Late Late Show last week.

Colette Byrne from Balinakill set up widow.ie, a supportive, online, self-help resource for and by, widows, widowers and bereaved life partners back in 2009 after the tragic loss of her husband, Peter Byrne.

The website had 7,000 members up to last week and Colette told the Leinster Express the reaction to the brave interview has been 'crazy'.

“The response has been crazy, I am only catching up on all the messages, tweets, emails and new members now.

“There are a lot of people out there who didn't know it existed who are widowed a couple of years but didn't know about it until now so it is great,” she said.

Colette’s husband Peter was killed in a road accident in Wolfhill, Co Laois in August 2008 at the age of 32. Their daughter was just three-years-old at the time.

Colette told the Leinster Express it was in the ‘devistatingly quiet’ hours in the evenings when she would have been spending time with her husband that she learned how to create the website for widows in Ireland to correspond.

“Little children, they go to bed early, so my family used to come down and Peter’s family would come down and visit for a few hours but when they go you would be left at home and your child is asleep and that was normally the time you would spend with your husband.

“I found it devastatingly quiet so it was in those hours I would have normally spent with my husband where I put the work into this and over the years it has become what it is today,” she said.

The purpose of the online community forum is to help people who have lost a loved one through mutual support, advice and encouragement.

The website has grown to have 7,000 members who connect in a private online forum that is free to use, run voluntarily by Colette.

After Peter died, she found herself searching the internet for support in the evenings, living in rural Laois and widowed at such a young age, she felt lost.

“In the period after the funeral, there comes a stage where you want to stand on your own two feet in a way. I was grieving Peter and living in the countryside in Balinakill and I wasn’t aware of too many support groups or what you do. I was actually lost in many respects as regards life as a widow.

“I didn't know anybody of my age widowed and the grief was quite intense. I decided I would search online to see what was available. I couldn’t really find anything suitable, I didn’t really know what I was searching for.

“I came across a couple of American bereavement websites where you could correspond with other widows and widowers and I could see the benefit of having something similar here in Ireland and so I decided I would give it a go.

“That first Christmas without Peter I researched how to set up a website. I spent that Christmas, in between trying to celebrate Christmas as best you could with a little child who just lost her father and by the end of January it went live.

“I wanted to correspond with other widows and widowers here in Ireland and find out how they survived, people even a few years ahead of me that lived and showed that life can come right,” she said.

Ten years on, Colette has seen the benefits for people from all walks of life. She spoke on The Late Late Show on Friday night, March 29 with two other people, a widow and widower, Venetia Quick and John Fitzsimons, on adjusting to life after the death of their partners, and why it’s so important for them to speak about their loss.

“I have known people there who have come absolutely devastated at the loss of their husband or their wife of all ages adults, teens, right through to people in their 70s and 80s are using it and have used it.

“If you see their first message how devastated they are right through to their most recent after they have used it for a while how they develop their confidence back in many regards by corresponding. It’s lovely to see people find their way and rebuild. There’s never a post that goes unanswered there’s always someone willing to lend a hand,” she said.

Colette works at Dowling Quarries at  Lisduff, Errill, and all of the work on the website is done in her own free time.