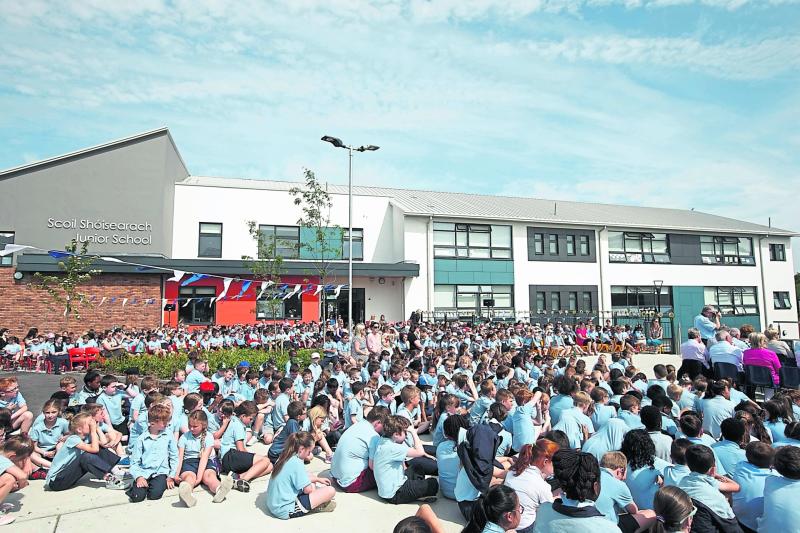 The new Portlaoise South Circular Road extension is going to push traffic and lorries onto roads used by over 1,300 children at the Holy Family School campus according to councillors.

Portlaoise councillors are set to meet with Laois County Council’s road design team to carry out a review of how the roads at Aghnaharna can be made safer for everyone using the footpaths, roads and crossings.

The Portlaoise South Circular Road extension links the Timahoe Road with the Abbeyleix Road creating a town bypass for lorries past the school.

Cllr Noel Tuohy tabled a notice of motion at the recent Portlaoise Municipal District meeting asking for traffic calming measures at the school.

He said residents in the area have said that traffic is either at a standstill during the drop off an pickup times or else people are driving too fast on the road.

“There are hundreds and hundreds of kids, parents and grandparents using these paths every day. You have either traffic moving too fast or you have traffic not moving at all. When they get out of the school changeover times they tend to just boot it.

“The flashing lights similar to the one on the Stradbally Road would be adequate. I think that should be provided particularly near schools. It would be a sad day if as soon as they went out on the main road that they were in danger,” he said.

Cllr Willie Aird said traffic will be 'pushed' past the school campus.

“We have seen nothing yet as regards the traffic, wait till the new continuation of the road that is being erected at the moment is complete.

“We are pushing all that traffic up now by the schools and back out onto the Stradbally Road and they are heading for Rosslare. We have seen nothing yet.

“With all those small little kids coming out of the Holy Family School, the wind from an articulated lorry would nearly suck them out onto the road and you have no choice but to put railings all there,” he said.

Area Engineer, Wes Wilkinson, said a proposal has gone through to senior council management to try to get funding to install permanent bollards at Aghnaharna from the railings down towards the roundabout.

Cllr Pauline Madigan called for railings to be installed rather than bollards.

“Genuinely to me, it looks like an accident waiting to happen. All you need for a little child to run out after a ball or do something and the railings surely would make sense there,” she said.