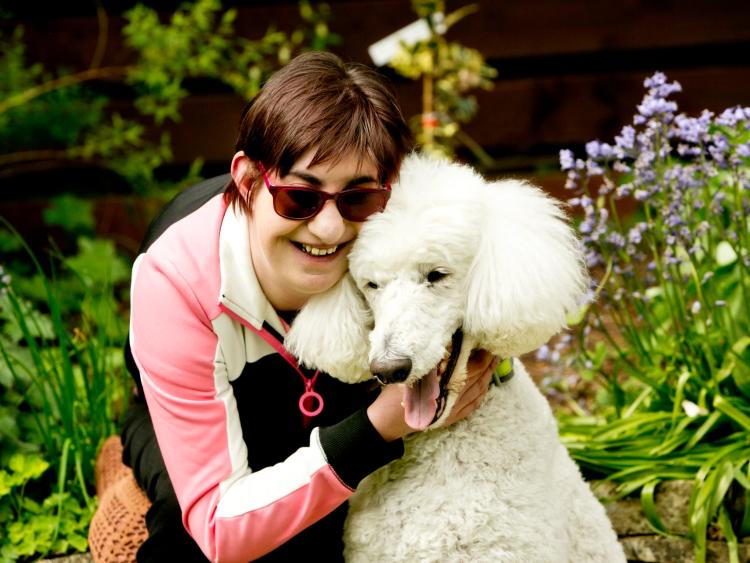 Aran Murphy from Laois distinctly remembers the day the life-changing call came to be matched with a guide dog.

The life-changing call about a new guide dog came in the final year of college and Buttons assisted in collecting the well-earned degree.

“In secondary school after a heart operation, I began to use the white cane. I felt that it drew the kind of attention that I didn’t want. I felt different, alienated from classmates and denied social activities like going out and even going to my debs.

“People tended to avoid or ignore me or treat me as if I could not speak for myself when interacting with me. These instances affected my self-esteem and one embarrassing incident in particular when my cane got stuck in a bin made my mind up to apply for a guide dog.

“In October 2013 I had a guide dog assessment. After a couple of months of hoping and waiting that life-changing call eventually came. A standard poodle had just finished training and we were matched. A poodle? At first, I thought it was a joke, all I could picture was the little French poodles. I had never heard of a poodle guide dog before. I will never forget that call.

“It was love at first sight! I thought our first walk was amazing little did I know how tuned into my needs Buttons would become.

“My family, neighbours and friends could not believe the change in me. Instead of people avoiding me as they did when I had a cane, they now chatted to me about Buttons and made me feel more included.

“Although I only had Buttons in college for the last term of the final year he was invaluable for my confidence and success. I was so proud when he led me to the podium later that year to receive my degree.

“Being a guide dog owner is such a privilege and positive experience. Buttons has enhanced my life and I will always be grateful for that,” Aran said.

Orlaith O'Reilly from Portlaoise said their assistance dog, Hunter, for her son with Autism Spectrum Disorder has given her family a new lease of life.

Orlaith's eldest son Ruairi is 14 and was diagnosed with ASD when he was three. She said things like shopping was stressful and on high alert.

“Ruairi was a happy little boy when things went in his favour but with communication issues, this didn't always happen and so this would lead to a lot of frustration which resulted in a meltdown or shut down.

“He could run from us and he held no concept of danger.

“Family outings became very stressful as we would always fear Ruairi might run away and something would happen to cause him injury or even death.

“On an outing, I was always holding Ruairi by the hand on high alert always watching for danger in a fight, flight or fear. Ruairi could sense this from me and returning home from a shopping trip we would be mentally and physically exhausted. We rarely did anything as a family.

“We applied for the Assistance Dog Programme with Irish Guide Dogs in January 2014 and in April 2014 we brought Hunter home to Laois and life as we knew it changed. I knew Ruairi was safe and I didn't need to hold him.

“Having Hunter makes the things in life many of us take for grants easier like safety, exercise, communication, independence and a sense of ease. It's like a weight is lifted. We feel lucky, blessed and so grateful to all in Irish Guide Dogs,” she said.