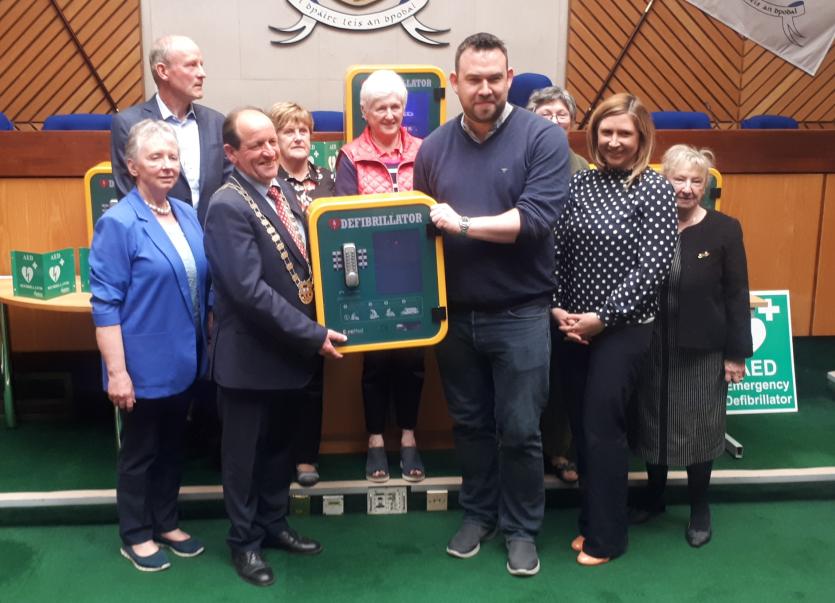 Saving lives is the aim of the game for a local group who set out ten months ago to create a defibrillator database for Laois and get more publically accessible 24/7 defibrillators across the county and CPR training.

They have worked to gaps in the provision of defibs and three new life-saving machines and five locked security cabinets now ensure that more defibrillators will be available 24 hours a day.

The new defibs and the security cases were presented to the communities at a reception in County Hall on Tuesday, June 11.
Before this project, there were no publically available defibrillators in Portlaoise. There were 30 in hotels, schools, libraries and other places with limited access due to opening hours.

Now, there is a defibrillator locked in a box available 24/7 on the wall outside Laois Pharmacy in Lyster Square, outside the Spar on the Mountmellick Road, Portlaoise, one has been placed in a security box outside Portlaoise Parish Centre and one at Midlands Prison visitor centre on the Dublin Road is being moved outside thanks to this work.

The Heath GAA, Arles Killeen GAA, Killeshin, Durrow and Ballaghmore communities were presented with security boxes for their existing machines. Rathdowney village was presented with a defibrillator and box that will be installed on the bridge in the town and the GAA club has been given a box to move theirs outside for public use. Stradbally was given a donation and now has two 24/7 public defibs.

All of the new boxes are fitted with the security code 112 which is the emergency services number and they have heated cabinets to withstand all weather conditions. A committee has been formed for the maintenance of the machines.

Speaking at the presentation last week, Mr Peter Naughton said he approached the National Ambulance Service to find out how many defibrillators were in Portlaoise and he was surprised to find out there were 30 but none of them were accessible to the public.

He organised the research on existing defibs and the project group updated the ambulance service on all of their locations and codes.

“The aims of this were to identify the locations of the defibrillators in Laois to provide them in areas where they were deficient and to provide training,” he said.

This project has cost €9,500 in total so far with €5,000 from a Healthy Ireland grant, €2,500 from the council Age Friendly Programme Fund and councillors discretionary fund plus €2,000 from the Portlaoise Lions Club.

One of the project members, Derek Phelan, said the boxes have to be locked. He gave numerous examples of places that had a defibrillator but only during certain hours. In some examples, the defibrillators were hidden behind furniture and others had locks with no information on how to open them.

“It’s unfortunate recently there was a defibrillator stolen from the reception area in the Castle Arms Hotel in Durrow an absolute disgrace, it still hasn’t been found.

“Unfortunately, that’s the society we live in so what we have done is while we would prefer not to lock them. It makes it more difficult for somebody to open it and it makes people aware of the emergency number.

“I hope that our work will help to save lives and that was the purpose,” she said.

Cathaoirleach of Laois County Council, Willie Aird, said 'if it saves one life isn't it a great thing for everybody' and congratulated all involved in the project.