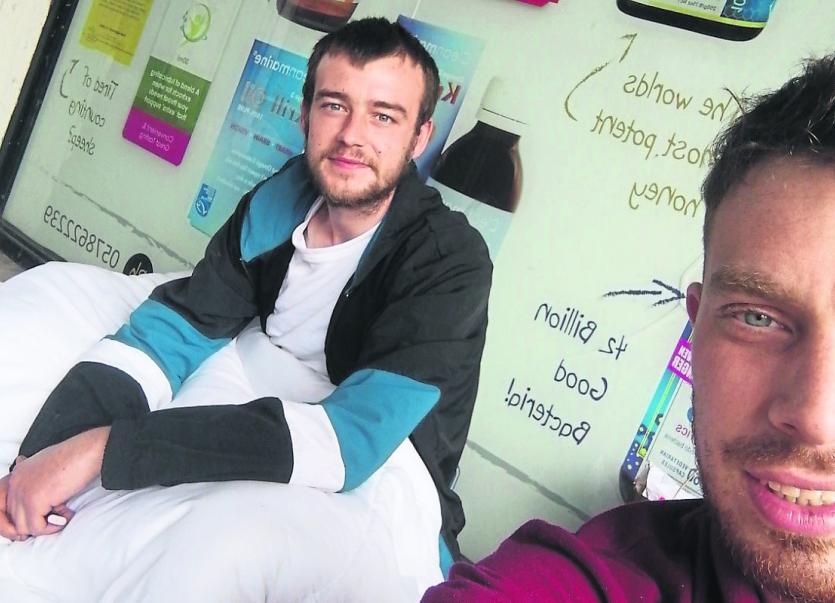 A young man who has been sleeping rough in Portlaoise has faced huge difficulties finding a place to live after over €2,400 was fundraised for him.

Dean Maher from Stradbally started an online fundraiser in July to ‘Find Graham A Home’ and raised €2,465. Dean told the Leinster Express about the frustration they have faced trying to find somewhere for Graham, who found himself homeless after leaving foster care at 18, to rent in Laois.

Dean got to know Graham who is from Belfast after approaching him with food one night. They chatted and Dean gave him a place to stay when he could and they became friends over time.

Dean was thrilled with the success of the fundraiser but said they are struggling at the moment because landlords do not respond when they realise Graham is homeless.

Dean told the Leinster Express about this struggle to get Graham off the streets and into the rental mark.

“It is a struggle now at the minute, unfortunately, we are being let down by landlords left, right and centre being promised house viewings, going through it and then they are not answering me back when they find out he is homeless. Some are asking for drug tests and urine samples and everything there is no real need for it.

“We are frustrated and let down, people don’t know how hard it is to get a place to rent, there aren't many places to choose from. Rent is up to €1200 per month, even working full time earning €300 to €400 per week that is not feasible. With the money raised, we could get him somewhere for one month but he said himself he would end up back on the streets.

“I understand that landlords want to cover themselves but it is very hard. People are still seeing him on the streets and asking why he hasn’t gotten somewhere to live yet but it hasn’t been that easy, there are very few places to rent and we have gone to a lot of viewings but they all reach a dead end.

“We were sitting in the car the other day just chatting about how we move forward from here. In the beginning, money was the issue because we couldn't cover the cost of getting him back up on his feet ourselves, now thanks to the fundraiser, we have the money but the next step has been so hard to take.

“It is so hard to move forward, there are so many hurdles in the way. We went to Laois County Council last week looking for emergency accommodation but they say that he needs to go back to Dublin Council.

“He hasn't gotten anywhere to live yet and he wasn't able to start the job he was offered and go back to the streets in the evenings, he needs somewhere to live first. He did that before and you can do that for a week or two but you need to be able to come home from work and have a shower and somewhere to lie down.

“Even for social welfare he has to go to Dublin to get it every week, he is only getting half of it and by the time he travels up a good bit is gone. He went up last week and he was jumped by five people, his money was taken and he fractured his thumb, he is not in the best place now he was so positive a few weeks ago but he is disheartened now with all of this.

“PATH is helping him with food, they recommended getting him into Cuan Mhuire in Athy for residential rehabilitation and once he gets on that programme and gets the help he needs they have support for housing after and references for landlords that work better than someone like me trying to give him a reference,” Dean said.

It is planned that the money that was fundraised for Graham will now be used to get him a place at Cuan Mhuire according to Dean who said it seems to be the best option as he will get the support he needs.

READ MORE: Over €2,000 raised, job offer and place to live for young homeless man in Laois